Most people have lifetime goals. Maybe you want to own your own home by the time you’re 30. Maybe you’d like to meet your childhood idol. Maybe you’d like town your own business. Or maybe, if you’re Haile Thomas, you want to help reverse your father’s diabetes, tour the country as part of a government initiative to educate kids about healthy eating, start your own nonprofit to reach kids in underserved communities, turn your family vegan, and become BFFs with first lady Michelle Obama, all by the time you’re twelve years old. (Kids these days.) [tweet this]

Today I’m honored to introduce you to Haile Thomas, health advocate and the founder of the Happy Organization and the host for the YouTube channel Plant Powered Haile. Now at the ripe old age of 14, Haile hasn’t slowed down in her mission to bring plant-powered health education to kids everywhere. 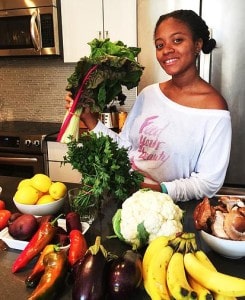 Haile is one of the Animal Hero Kids I introduced in my recent video with that organization’s founder, who awarded Haile with the Paul McCartney Animal Hero Kids Young Veg Advocate Award this month, adding to her already impressive resume.

When I had the chance to speak with Haile, I first asked about how her father’s battle with diabetes lead to her family’s quest for health and subsequent vegan conversion. (To hear all of Haile's answers, be sure to check out the video above, but here are some choice nuggets):

“Initially it wasn't really about vegan food at all or animals at all it was more a family effort to try to reverse my Dad's type 2 diabetes.  As a family, we really looked into a lot of food documentaries and how animals are treated in the food industry and all the side effects and all those things that can happen to you from eating meat and so we kind of at that point, a few years ago, we were just learning at first and I think it was just kind of an initial introduction to all those things.  Over time he just started to get better and we were able to reverse his type 2 diabetes with healthy lifestyle changes.”

Haile shares about how this family health scare turned victory inspired her to take action on a broader scale.

“After we had really had this health revelation it was kind of where I was learning that kids were getting type 2 diabetes and heart disease and becoming obese and all those things. And I really started to think that maybe if we hadn't become healthier I could have gotten type 2 diabetes or any other health related disease. So, I just kind of started freaking out like ‘oh my gosh not a lot of kids know this'. There's all these documentaries and information out there but nobody's really telling them about it. So I kind of went to my Mom and it was like “O.K. I want to do something. I want to tell the kids at school. I want to tell anybody who will listen”.

So, from there we discovered the Alliance for a Healthier Generation which is a Clinton Foundation initiative and I just applied. I was only 10 but, I didn't really have a lot of things underneath my belt. They gave me a lot of opportunities to talk to lots of adults and kids about how kids and adults should work together to try to get kids eating healthier and moving more and all those things.

For a few years I was just traveling the country giving speeches and talking to kids doing cooking demonstrations. I was on the Food Network promoting healthy foods and just different appearances and all those things. I worked with Hyatt Hotels to reinvent their kid's menu so that it was healthy, sophisticated so kids really felt appreciated on the kid's menu.

I did all of that for a few years and then I started to realize well O.K. I am doing a lot of things that are catered towards kids who kind of know this information and kind of already have the concept and so I started thinking about how in my community a lot of under-served areas just don't have access to places where they can get all this information for free or for very low cost. So, that's kind of when I went to my Mom and was like “Hey do you want to start an organization?” and she was like “O.K.”.

We worked on developing a name and we chose HAPPY because it stands for Healthy, Active, Positive, Purposeful, Youth. And so we work on each of those sections and we've had the organization for almost 3 years, which is really great.

We've reached over 5000 kids between classes and just really educating kids on nutrition. It's been very interesting to see the transition in our curriculum for sure as our knowledge of food and health has changed over time.

One aspect of Haile’s mission is helping kids connect with their food sources and empowering them to take charge of their own health.

“I think that for a lot of kids they just don't realize that they really do have power over their health.[tweet this] I think that at a certain level just like, ‘whatever my parents buy for me is whatever it'll be' and that's not necessarily true if you really are educating yourself about it then you can go and educate your family about the benefits of eating healthier. We definitely work to just empower kids to know where their food comes from.

We provide nutrition, education and cooking classes for kids and under-served communities as well as fun physical activities, which include things like Yoga and Meditation, so, that's kind of dealing with the positivity. And you know we have the motivational people come in as well so they can kind of feel empowered to go out and find what they believe in

We mostly focus on the nutrition and cooking aspect. Right now we are in schools, we are doing our ‘Happy Chefs' program, which is where the kids get to freestyle cook and try all these really different fruits and vegetables. They can learn about the difference between organic and non-organic so, we really put it all out on the table but in a kid friendly way. [tweet this]

A lot of littler kids who are like 6 years old and are really into it and we take them out to farms and they really get to see and get hands on experiences with harvesting that cucumber and then making a salad out of it. So, we definitely make it where the connection is very clear to them and that they can see the benefits of it.”

When I asked Haile what the most rewarding experience in all of her work has been, she said she had two.

“The first one, I would say, is when we're teaching the kids in our classes and you kind of see this light bulb go off on the kids’ faces and you can really see that they just made a huge revelation in their heads. And it's like you really see how they were just begging for a bag of Cheetos and now they want carrots.

Once you just see that transformation and when that happened it really amazing. We had one summer camp, last summer, where we were teaching kids about what were in hot dogs and the kids were just so grossed out by it and they all wanted to watch the video over and over again. The next day we took them to a field trip and we just so happened to have a pit stop at the meat department and the sampler person was like “Oh, you guys want some hot dogs?” and in unison they all said “EEEEWWWWW!”. So, it was like, it was just so awesome to see that they really retained that information that they learned and once they saw those hot dogs they were like, “We know what's in there”. I think that is always really rewarding.

I think my second rewarding moment was probably when I introduced the First Lady and after that because once I sat down she went on to talk about me for like 10 minutes and my Mom was just crying so proud of me and so, I think that was probably the most rewarding because in that moment it's like, it really paid off and people really see what I am doing is really helping others so, that was really awesome.”

Haile has certainly accomplished a lot in her 14 year, not the least of which was leading her family from their new healthy way of eating, to full blown veganism.

“It's actually funny when we first went vegan I kind of, like, challenged my Mom and I like blasted her on Facebook to be a part of the challenge to go vegan until the end of the year last year. So, obviously we lasted way longer than that but at first when I said that to my family everybody just looked at me like I was crazy, like “What are you talking about? How can we give up our chicken and our fish and all these things”.

It was definitely a difficult transition for some of our members in the family but ultimately when we all sat down and just learned about everything together it was kind of like a unity. We watched all of those documentaries that are heart wrenching but for some of the members in my family that is what they really needed to realize that this was just a friendlier way to go about our lifestyle. Also, a lot of people think that it is really difficult and mostly the difficulty is mental.”

If you want to find out more about Haile and follow her work, check out all of her links below! Haile is a powerful force for the health of future generations, for the lives of animals saved by more people eating more plants and for our planet so ravaged by animal agriculture.

Having accomplished so much in her first 14 year on this planet, I can’t wait to see where she goes from here.

Stay tuned to the channel to hear from more Animal Hero Kids. If you liked this video, do give it a thumbs up and share the post around to help show what kids can accomplish!

← Do I Want Kids, My Childhood, Ethnicity + | Personal Q&A Pt1Kidnapped At Birth | Draw My Life →