The overpopulation of deer in suburban areas can become a particularly dangerous situation when it comes to car accidents.  The most commonly proposed solution to this problem is hunting deer to thin out the population.  But is hunting really an effective method of controlling deer populations?  Without of hunting, would we be completely overrun by a new mutant breed of deer overlords?  Let’s find out!

This video post is going to be the first in a series addressing common myths about hunting.  With the deer-hunting season upon us, at least here in North America, I thought it would be appropriate to start with the so often-cited argument that hunting deer is necessary to keep their population in check.

First off, something important to note is that when speaking about out-of-control deer populations, state wildlife management agencies will rarely use the term “overpopulated,” opting instead for “overabundant.”  To understand this carefully calculated word choice, let's take a closer look at the terminology.

Overpopulation means a population has exceeded it's biological carrying capacity, which, by definition is the maximum number of individuals of a species that can exist in a habitat indefinitely without threatening other species in that habitat.  This is determined by limiting factors such as available, food, water, shelter, and prey to predator ratios.

When a species exceeds its biological carrying capacity, it is officially overpopulated.  In contrast, “overabundant,” the term hunting advocates use for deer populations, means…nothing.  It's not a scientific term and it has no fixed definition.  It's simply a way to make it sound like we're going to be overrun by deer any minute now.

(Has it happened yet?)

In reality, if deer did overpopulate a given area, this incredibly powerful force called nature would step in to regulate.  Trust me, this nature thing's been handling things like this for a while now.

The problem of overpopulation arises only when humans interfere with nature.  This is the most perverse element of the “we need hunters to control the deer population” argument: Deer populations become excessive because of hunting.  The proposed solution is the source of the problem.

So, just how does hunting increase deer populations?  There are two main ways.  The first is orchestrated by state wildlife management agencies and the second is a direct effect of hunting practices.

Wildlife agencies, like State Department of Natural Resources here in the US, make some or all of their money from selling hunting licenses. 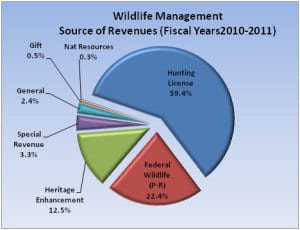 Example from the Minnesota DNR

Many of their mission statements explicitly state their responsibility to provide hunting opportunities.  One of the ways they can increase these opportunities and thus increase hunting license revenue, is by clear-cutting forested areas to create habitat ideal for deer. The Virginia Department of Game and Inland Fisheries, for example, recommends clearing multiple areas, each one-three acres in size, a practice, which not only significantly boosts deer populations, but is also environmentally damaging.

“We manipulate forest habitat to produce amazingly unnatural deer numbers–up to two million of the critters some years.  That probably approaches two million more than existed before man got into the act.”

(What a preposterous thing to think!)

Well, to these agencies, deer are seen as a resource.  Not as animals deserving protection and definitely not as sentient beings.  They are financial resources to be exploited for the sole purpose of being killed for sport at a profit.

Even the terminology used equates these sentient creatures with plants and views them as pure statistic.  The Wisconsin Department of Natural Resources states in their annual report:

“We rank first in the country for the highest single year deer harvest on record and are number one for deer harvest over the past decade.  All of us work hard to keep it that way.”

Vegan activist Gary Yourofsky in his own article on hunting states:

“Everyone must understand that wildlife management is an illusory concept created around 100 years ago.  There is no such thing as wildlife management.  Humans cannot manage nature.  The only managing humans should be doing is managing to stay out of the animals' space.”

Now moving on to the second source of artificially overabundant deer populations: The practices of hunters themselves.

Conventional deer hunting is all about killing mature male deer, or bucks, with large antlers, leaving the female deers, or does, alone.  A single buck can breed with multiple does, so while hunting reduces the number of male deer it does not reduce the number of offspring.  This sex-biased hunting skews the natural 1:1 ratio of male and female deer to as high as 1:8, meaning one male for every eight females.

I’d be remiss if I didn’t reiterate what i said in my video post “what would happen if the world went vegan tomorrow”–creating an artificially high population of deer and then stepping in to say you have to hunt to control this out-of-control deer population is like farting in a room all day and then saying, “Thank god I’m here to open a window otherwise we’d be overtaken by the smell.”  In both cases, if humans hadn’t stunk it up in the first place, there’d be no “problem” to resolve.

Let me know your thoughts about deer overpopulation in the comments and be sure to share the post around to bust this myth!

What is Deer Overabundance? By Doris Lyn

Gary Yourofsky on Hunting (click on “What’s Wrong With Hunting”)

How are Deer Managed by State Wildlife Agencies? By Doris Lin

What if the World Went Vegan Tomorrow?

Is Eating Animals A Right?

The Ethics of Eating Meat