Do animals WANT to be eaten? The question seems ridiculous at face value. I mean even the most staunch meat eater wouldn’t assume such an absurdity, right? Well, when it comes to eating animals, we rely on any number of rationalizations and justifications to normalize the underlying  of incongruity of our actions.

It’s no secret that advertising and the media can have a powerful influence over human behavior. And societal attitudes and expectations are often shaped by and in turn shape the media messages that bombard us day to day.

While a level of fantasy and suspension of belief is inherent within advertisements, [tweet this] they are still crafted in response to and anticipation of what consumers want to hear. What they want to believe. What will make them consume.

And what better way to assuage any discomfort with consuming the bodies and secretions of living beings, than to portray those beings as willing participants in their own demise? [tweet this]

The concept of animals as complicit in their own consumption is not new. While often proffered in a presumptively playful manner, such as with the oft-repeated one-liner “if animals don’t want to be eaten, then why are they made out of meat”—or some variations thereof—the sheer pervasiveness of this concept, which crosses cultures and spans decades, belies such flippant dismissal.

In fact there’s such a wealth of images, videos and products promoting the propaganda of animals wanting to be eaten that distinct subcategories and ranges of complicity emerge. We’re going to look at a few examples—from the rather benign to the utterly shocking. I’ll delve deeper into some of the recurring themes in future videos.

[Note: while I will include video stills and a sampling of print images, for the full range of advertisements and actual footage, please see the video above.]

On the “tamer” side of the spectrum, we have the animal mascots, marketing the bodies of their own kind with unbridled enthusiasm and reassuring smiles. From restaurants to billboards to product packaging to TV commercials, animals are all-too happy to encourage the consumption of their corpses. 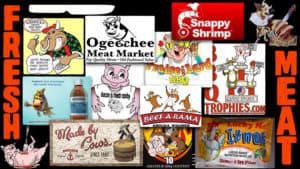 [a cross-sampling of smiling animal mascots, happy to encourage their own consumption]

They’re educational spokespersons for industry propaganda, like the patriotic fish featured in a 1976 American Seafood Industry commercial wherein he surveys a table full of his fallen fellows with reverent appreciation for the their killers. 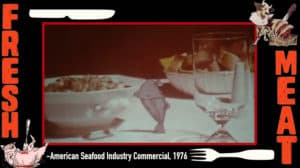 They celebrate their demise with dance, as in the “I Like The Way You Moo” cow from a Colman's Instant Beef Gravy Commercial: 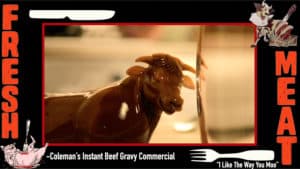 ‘Cause nothing gets your toes tapping like the idea of your desecrated corpse being bathed in your own juices!

Or receiving the distinct honor of having your remains offered atop a pizza, like the Techno Chicken's catchy celebratory dance in Domino's BBQ Chicken and Bacon Pizza Commercial: 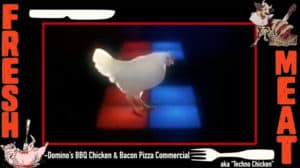 Taken a step further, we have animals not only happy to be eaten, but actually assisting in the process. From this 1919 French advertisement of “Good Sausage From the Prodigal Pig,”[1] to its 21st century macabre rebirth as a dashboard bobble: 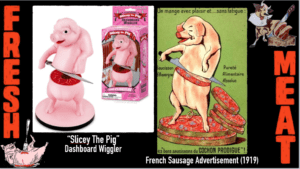 there are ample examples of animals serving themselves up with suicidal glee: [tweet this] 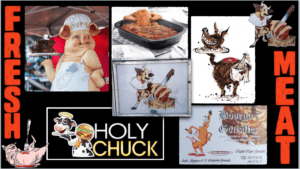 even to the extent of being unable to resist their own delicious flesh: 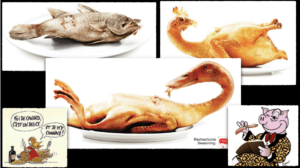 There is at least one depiction of complicit consumption that underscores rather than obscures our natural aversion to killing sentient beings: Douglas Adams’[2] pig who wants to be eaten: [see video for clip, the following is the dialogue sampled]

[In a restaurant a pig-resembling animal is wheeled to the table on a platter. The diners are Arther, Trillian, & Zaphod]

Pig: ‘I am the main Dish of the Day. May I interest you in the parts of my body? Something off my shoulder perhaps?'

Pig: ‘But naturally my shoulder, sir, nobody else's is mine to offer.

Trillian: ‘You mean this animal actually wants us to eat it?'

Arthur: ‘That's absolutely horrible—it’s the most revolting thing I've ever heard. I don't want to eat an animal that's lying there inviting me to. I think it's heartless.'

Zaphod: ‘Better than eating an animal that doesn't want to be eaten.’

Arthur: ‘That's not the point…Alright maybe it is the point.’

But suicide’s not the only side. Let us not forget the homicide. Animals encouraging humans to eat other animals is the theme behind one of the most recognizable restaurant campaigns. That of Chik-Fil-A’s Eat Mor Chickin” cows: [additional commercial footage featured in video above] 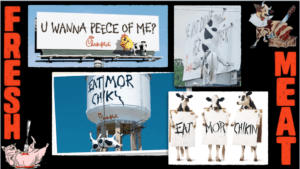 The adorable, Wile E. Coyote-worthy antics of these sneaky cows distract from the disturbing implication of their explicit encouragement of the mass murdering of chickens.

Taken a step further, we have animals not only encouraging, but also enthusiastically participating in each other’s homicide: 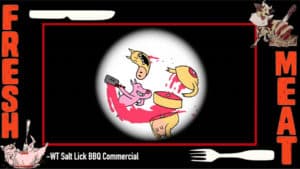 Sometimes in a communal consumption of one another’s body parts: 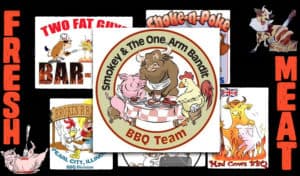 And then there’s this gem of a commercial, actually entitled “New Sexy Movie Stars On The Farm”: 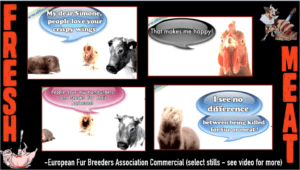 We even have animals instructing us on how to properly imprison them: 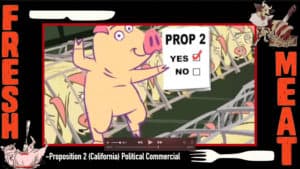 How to humanely handle their transport to their deaths so as to reduce bruising and production losses: 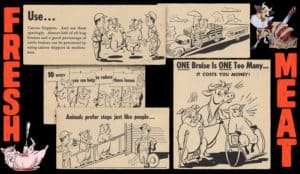 And marketing willing edible animals to children is not only commonplace but also necessary to normalize the inherently discordant concept of eating those we love: 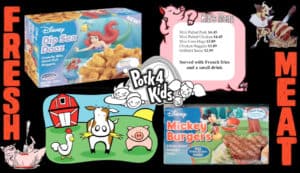 I’ll be devoting an entire video to the messages marketed to our youth. [see my videos for kids for help teaching children the truth about our food in an approachable way!]

One of the more disturbing trends within complicit consumption, which I’ll also explore in depth in a separate video, is the sexualization of the animals offering their bodies so willingly.

The implication of a sexual element to animal consumption itself has a range of the more subtle to the outright perverse.

to a Burger King add where a man at Make Out Point is secretly eating a burger when he’s caught by an angry cow he presumably has a relationship with: 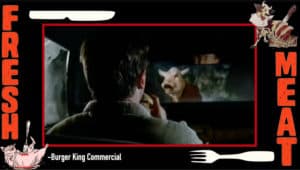 Now one would guess the cow is pissed that he’s eating a burger. But in the final moments, the voiceover states: “new Cheesy Bacon Tender Crisp: chicken so good, you'll cheat on beef!”–meaning she (the cow) is apparently jealous that he’s masticating someone else’s corpse.

And then we reach the level within the sexualization subcategory that completely redefines the concept of disturbing: 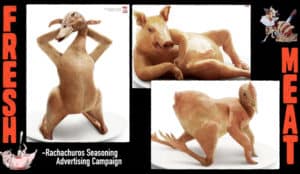 We all know that sex sells. So why not make our food animals willing in every way. It’s a distinctly disquieting level of perversity and one that speaks volumes to how we value—or more so don’t value—non-human animals. They are objects. Property. Products. Here for our pleasure.

These messages do matter. They normalize atrocities. Paint victims as complicit in their own victimization so that we, the perpetrators can get what we want without the guilt.

And why not? After all, they’re asking for it.

I hope that this video provoked taking even the slightest pause and stepping back from the messages our media sends and we, in turn, reinforce within ourselves and our children. Advertising, after all, is just giving us what we want. Reflecting the desires of society at large. Helping to heal the disquiet within us created by taking pleasure in the demise of living beings.

I want to give a special thanks to my Nugget Army family on Patreon for making this video and all of my videos possible. Please share this video around to spark discussion and awareness. For a more in-depth look at the lies we tell ourselves, see this video here.

And for a veritable cornucopia of complicit consumption imagery, check out the now inactive but digitally preserved blog Suicide Food.[3]

I’d love to hear your thoughts in the comments below! Do give the video a like if you found it helpful and subscribe for more vegan content every Monday, Wednesday and some Fridays.

To support messages like this, see the support page or join us in the Nugget Army on Patreon.

[2] Footage from the film Hitchhiker’s Guide to the Galaxy (BBC Home Entertainment, 2005); specific scene adapted from Douglas Adams' The Restaurant at the End of the Universe, (New York: Del Rey, 1995).