Hunting is often brought forth as an ethical alternative to factory farming.  But does the method by which an animal is killed effect the morality of their death? [tweet this]   And does killing our own dinner imbue the meal with greater justification than if it were factory farmed?  There’s been quite a lot of debate over this ethical quandary, and I figured I might as well take a shot…y'know…cause it's like hunting?  …(That's not a very vegan joke)

This is the second video in my series on common hunting myths.  In the first, we looked at incredibly pervasive myth that hunting is necessary to control deer populations.  And today we’re taking on the question of hunting’s ethical superiority to factory farming.

Even the staunchest meat, dairy and egg eaters will readily agree that factory farming is far from ideal.  It’s environmentally devastating, a serious health hazard for animals and humans alike, and an ethical land mine of horrific practices.

In case you’re not aware, factory farming, also known as intensive animal farming, industrial livestock production, or concentrated animal feeding operations, is a modern form of farming that focuses on producing the highest output at the lowest cost possible.

With money as the only focus, the lives and health of the animals involved, the environmental cost, and the impact upon consumer health are all left in the wake of factory farming’s destruction.

This method of farming, wherein animals are kept in higher stocking densities than was traditionally practiced, includes the use of battery cages, gestation crates, and requires ample use of antibiotics and pesticides to mitigate the spread of disease exacerbated  by the overcrowding. Not only are the living conditions of these animal manipulated, but also their very genes as well.

All factory farmed animals have been genetically manipulated to produce more faster.  These animals grow twice as fast, or more, than is natural, resulting in a myriad of health conditions and injuries.  (See this example of genetic manipulation in turkeys)  Then there’s the environmental devastation and the adverse health effects for humans to consider as well, which I won’t go into detail on in order to keep this video focused.  You can get more information on the precise environmental cost of animal products in this video post.

Now before we try to comfort ourselves with the idea that this kind of farming exception to the rule and desperately attempt to resurrect the vision of the local, family-run farm, we have to realize that 99 percent of all farmed animals raised in the united states are factory farmed.  And according to the United Nations Food and Agriculture Organization, or FAO, 80 percent of growth in the livestock sector now comes from these industrial production systems with factory farms now accounting for 72 percent of poultry production, 43 percent of egg production, and 55 percent of pork production worldwide. [tweet this]

In comparison to this perverse method of acquiring our food, almost any alternative will look ethically preferable.  And hunting, in particular, holds the gleam of being a far more sustainable, honest way of killing animals for our meals.

When we look at the numbers and methods side by side, it’s no question that hunting is far more sustainable.  Thought hunting also has a negative effect on the environment and is the third most known cause of animal extinction since 1600, its impact is undeniably smaller than that of factory farming. 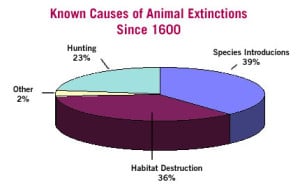 The idea the hunters are conservationist, however, is groundless, as hunters investment in habitat protection has nothing to do with the habitat itself and everything to do with ensuring future hunting opportunities.  This is evidenced by the frequent hunters endorsement of clear-cutting large areas and logging on public lands as both create edge habitat for deer.

On the human health front, hunted animals are typically wild and not genetically manipulated, antibiotic-free and not living in their own filth.  So on a pure hygienic, human-health stance, hunting would be preferable.  That is, assuming that we need to eat animals, which is a pretty big assumption.

But what about the million dollar question?  Is it more ethical to hunt and kill an animal for food than purchase animal flesh produced at a factory farm? [tweet this]

Well first off, the majority of hunting today is recreational.  But let’s assume a hunter is hunting with the express goal of consuming the animal.  Hunting proponents will argue that hunting is far more humane than factory farming as their prey hasn’t had to live in horrific, cramped conditions and their death will be swift and painless.

First, that’s assuming the hunter is an expert shot and can cause instantaneous death.  Second, and more importantly, it’s assuming the completely unrealistic idea that a hunter can accurately asses how another being of another species experiences their death.

But again, for argument’s sake, let’s say a hunter is able to cause instant, painless death, which is rarely, if ever, the case.  Is that death somehow cleansed of all wrong?

This line of questioning closely mimics the humane, free-range, and cage-free arguments.  And I find that, statistics and philosophy aside, the best way to put all of this in perspective is to reframe the situation.

For instance, if I followed you around and then shot you, but made sure you died instantly, does that make it okay?

Since I didn’t keep you in a cage or castrate you or pump you full of antibiotics, can I wash my hands of your blood in good conscience?

If I am sure to use all of your parts and leave nothing to waste, does that give you comfort? [tweet this (if you dare)]

Would it comfort your family to know that used a bow and arrow to kind of even the playing field between us?

That’s bring up another issue: The idea that hunting is natural, or simply the circle of life is nothing but an ungrounded, romantic notion. [tweet this]  Unless you’re able to complete your hunt and eat your kill without any weaponry, tools, or cooking, it’s not natural.  And looking at our biological hardware and aversion to biting into an animals hide and consuming the raw flesh, blood, lymph, tendons and bones, it’s evident we weren’t meant for this.

This may seem an absurd visual, but it’s in these absurdities that we can better see the reality of the situation.  Choosing between factory farming and hunting is like me asking you:

“Would you prefer to be skinned with a rusty spork or filleted with a cheese grater?” [tweet this] or

In all seriousness, the comparison of factory farming comes down to the fact that that for the animal being hunted, that individual doesn’t know the horrors they didn’t have to endure, they just know those that they did.

We may be tempted to rank cruelty and find the lesser of evils, but the reality is we can eliminate all evils.  Hunting may be less horrific than factory farming, but why must we choose which is worse when there’s a third option? [tweet this]

We don’t need animal products to survive and in fact thrive far better without them.  And hunting, or “humane” farming, isn’t going to stop factory farming.  It just adds more lives to the death toll. Death is still death, and murder is still murder.  So let’s ditch the debate about which is worse and eliminate them both. [tweet this]

Now I’d love to hear your take on this matter.  Do you think hunting is more ethical than factory farming?  And does it even matter?  Let me know your thoughts in the comments!

Worldwatch State of the World 2006 Report

Does Hunting Help or Hurt the Environment? in Scientific American