This isn’t a typical video post of mine, but it’s very important. I wanted to share with you a challenge of unjust censorship I’m facing and ask for your help to have the truth heard. It’s a very simple action you can take, but amplified by each of you, it has great power.

First let me tell you what happened and speak to the disturbing undercurrent of social media discrimination and censorship of the vegan message. [tweet this]

The mission of Bite Size Vegan and the whole reason I started this channel was to provide free access to approachable but research-backed vegan education. And while I strive to make my videos entertaining and engaging, my core purpose remains to speak the truth no matter the cost. This is almost always an uphill battle, especially recently.

I had the incredible honor of seeing the video of my speech The Extremism of Veganism: Exposing The Greatest Lie take off and connect with people in a way no educational video of mine has before, and certainly not one that was over 30 minutes.

In the days after the initial post, people were organically finding the video, spurring a resurgence of views, sharing, engagement and momentum, which for a 30-minute educational speech on my channel is unheard of, yet what I always hope for. It was on its way to 100,000, and from the comments, it seems that people were actually connecting with the content in a powerful manner. [see some example in the video above]

Then I received an email from YouTube saying the video had been flagged as inappropriate. They reviewed it and placed it under age restriction. It will no longer appear as a suggested video and users have to be logged in and age verified to even find it. 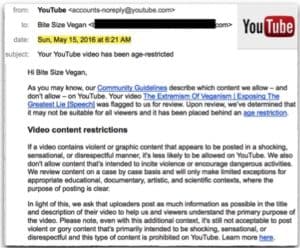 There is graphic footage within my speech—however, according to YouTube’s own policy stated within the very notification they sent me, my presentation of this footage falls within the parameters of “exceptions for appropriate educational, documentary, artistic, and scientific contexts where the purpose of posting is clear.”

They ask that “uploaders post as much information as possible in the title and description of their video to help [them] and viewers understand the primary purpose of the video.”

As always, I provide an almost excessive amount of information and framing in my description, as well as an entire blog post with extensive scientific citations and a full bibliography. I give viewers ample warning within the video to turn away or skip over the graphic footage, and even provide navigational time stamps in the description.

In addition, YouTube states that they don’t allow content that’s “intended to incite violence or encourage dangerous activities.” And yet videos, entire channels and social media posts of people killing and skinning living beings for pleasure, or posing in the skin of others beings who were anally and genitally electrocuted and skinned alive, or roasting dead carcasses with unmitigated glee, are totally acceptable. [see examples in video above]

While my speech and other activists are speaking out against such violence, in an educational manner, as YouTube states is an exception, these accounts and individuals are actively promoting violence, against YouTube’s own stated standards, of “shocking, sensational, and disrespectful presentation,” void of any clear educational framing.

Yet it’s the promoters of violence YouTube protects, while they censor, restrict or shut down entirely those of us pointing to the truth behind these socially-accepted atrocities. [tweet this]

Of course, the ultimate manifestation of this absurd and illogical bias would be if this video you ’re currently watching were to be flagged and age restricted for showing this very footage from other channels that not only remains unrestricted but is also deemed advertiser-friendly.

Take the gustatorial perversity of the Epic Meal Time clip displayed in the video above for example. I’d hazard a guess that were I to present this very footage on my channel within a vegan framework, I’d have yet another age restriction and advertiser pull-out on my hands.

You see, I often receive notices from YouTube saying that my videos, which show the reality of what we do to animals, are not appropriate for advertisers and all ads have been pulled. This is not due to copyright but simply because advertisers won’t go near them.

Society wants the end product without having to acknowledge the process. It's “inappropriate” to make people think about the lives they have paid to ruin. We can’t have a pre-roll add for pizza be followed by the truth about the rape, kidnapping, torture, abuse, confinement and murder that went into every slice, now can we?

As vegan animal activists, our most vital tool is our voice. We are more or less powerless to directly halt the mass slaughter of trillions of innocent beings every year. Our power lies in speaking out. In educating. In presenting the truth.

In a global culture of misinformation and childhood indoctrination, dominated by false assurances of humane slaughter and the happy animals on our plates, by the baffling concept that it’s acceptable to love animals and eat them, by the perverse sense of human entitlement and dominion over those we deem lesser-than, by the deeply corrupt allegiances between the animal product industries, governmental regulatory bodies, and educational institutions producing shaky-science-backed lies about our dire need for the very foods that are killing us, every single voice of truth is needed more than ever.

And I am by no means the first nor will I be the last activist threatened with unfair and unfounded roadblocks to speaking the truth.

Outspoken individuals in every movement have always fought censorship. The animal rights and vegan message are particularly dangerous as they threaten the very foundation of the lie the majority of the world relies upon remaining in tact.

The animals need every voice. The lies we are up against are incredibly powerful, pervasive, and persistent. And the consequences for speaking the truth can be dire. I am aware that in the Unites States even what I do could be considered terrorism under the AETA. But I know who the real terrorists are. And I'll continue to speak for their victims.

In the weeks since my video was flagged, it’s barely accumulated a couple thousand views. But this isn’t about the views—it’s about stifling the message and the bias of YouTube and other social media platforms revealed by the inconsistencies in the enforcement of their policies.

So what can you do to help? The day after tomorrow, on June 15th, 2016, I’m going to be re-posting the speech. And I’ll be spending the entirety of tomorrow at a 24-hour vigil with Toronto Pig Save, looking into the eyes of innocent animals on the way to their deaths, unable to prevent their senseless murders.

The new speech post will have the graphic footage removed with a link to the original video and explanation. What I need from you is to please watch the new posting and share it far and wide. I realize many of you may have already seen the speech. So you can even just let it run in the background.

We may never recapture the momentum of the original post, but all I can do is try. From the responses I’ve received, this speech is effective. Let’s not let it die. Let’s scream at the top of our lungs, refuse to be silenced.

Thank you for your support. Never stop fighting. Never give up.

Please join me in re-launching the speech and revealing the truth on June 15th, 2016 or any day thereafter. It may seem a simple step to take, but the implications of these seemingly small injustices are monumental. Take action. Call out hypocrisy. Go vegan. And fight.

➤➤ADDITIONAL RESOURCES:
➣ The Lie They’re Trying To Protect
➣ All of My Recorded Speeches
➣ The Power of Propaganda
➣ Criminalizing Activism & The AETA
➣ How We Justify This Abuse
➣ HUNTING LIES
➣ OPEN YOUR EYES to the Truth [My First 24 Hour Vigil With Toronto Pig Save]
➣ The Lie of “The Nicest Way To Die”
➣ Do Animals Want To Be Eaten?
➣ The Food That's Killing Us
➣ The Lies Doctors Tell