One of the most common comebacks when a strength athlete is revealed to be vegan is, “well they must have gotten their gains before going vegan and just maintained while vegan.” Well, my guest today was raised vegetarian and went vegan in 1998, then built an epic physique that still confounds his competitors. [tweet this]

Torre Washington is a rarity among bodybuilders. He’s not a recent vegan convert, or someone you can say got his gains on meat. Raised vegetarian, outside of a 3 year period he’ll talk about, and vegan since 1998, Torre got his pro card at his second competition ever and has been unstoppable since.

But why am I yammering on? Let’s see the evidence. 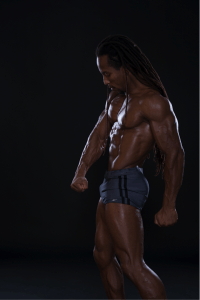 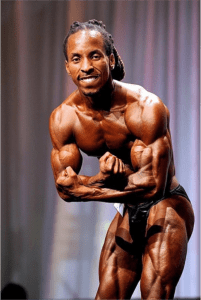 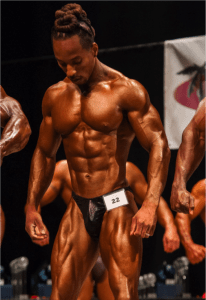 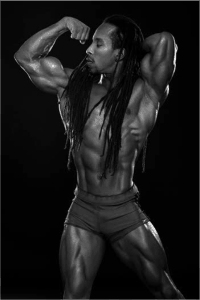 Now, let’s hear from Torre about his vegan and bodybuilding journey. Make sure to watch the video for the full interview but here are some choice nuggets:

On when and why he went vegan:

When I was younger my mom raised us, me and my brother, vegetarian. She raised us vegetarian based on her belief system. her belief system, she is an advent Seventh Day Adventist—they believe you’re supposed to worship on the 7th day of the week which is considered Saturday. Their philosophy also is that we live of the earth—we utilize food from the earth for the health; eating natural foods, not eating animals, not eating pig, definitely, not eating anything that is so called “unclean.”

So, my mom raised us that way for about 10 years, then around our 10th year we were shipped to Jamaica. … My mom took us there to live with my grandparents because she was struggling, kind of, taking care of us so she needed some help. … So, while we were in Jamaica my grandparents, my mom said, ‘just please don’t feed them pork’ because they knew nothing about vegetarian [diets].

So, in Jamaica my grandmother and my grandfather fed us meat, but I’ve never eaten pork. … We were there about almost 3 years. Then I came back to the U.S. and that continued for a little while until I came into the Rastafari culture.

And so, while in the Rasta lifestyle I saw that the Rastafari lifestyle spoke on being Ital. Ital is natural of the earth, using earth to provide nutrition and life, but most of the Rastas that I knew still ate fish, and still consumed chicken. So, it was like “eh”—me becoming into my own I didn’t want to be hypocritical, so I said “yo, I’m going to go definitely fully ital.” I didn’t even know it was called vegan until later on in life. I’m hearing this terminology “vegan” and people were like “oh, you’re vegan, what is that?” And so, I started to look into it. [tweet this]

On his bodybuilding inspirations:

Bodybuilding came up to me once we got back from Jamaica. I would start seeing Arnold Schwarzenegger, and seeing him on TV. I was really into comics so I used to draw comic characters like wolverine, and superman; their shape, you know, just the superhero look. I wanted to look like that so I just started working out. … I started reading everything. Anything about bodybuilding I read it. Read about form. read about how to train and this, that, and the other. I just continued to do that.

On how he became a bodybuilder:

In middle school while I was in Florida a friend of mine also worked out, so we started working out together. … I wanted to compete but I was young, thinking, ‘ah, I’m 15, I'm not gonna be able to compete’. So, then high school, my friend started competing and about freshman year [or] sophomore year of high school, he dropped out to continue to compete which I was like, ‘wow!’ I finished high school. I also did track, track and field. I run to sprinting 100 meter, 4 by 100 meter, and relay, so, out of 200. I didn’t compete.

I started going to college and at Tuskegee University, I took up engineering. And as I’m taking up engineering my advisers said to me that “you don’t have time to do anything else, so you can’t do track anymore.” So I had to cut track out. Got my engineering degree and once I graduated college, bodybuilding, as far as competing, I wasn’t even thinking about it anymore. Now, I would go to shows here and there, then I had a friend in 2008 who I know from Florida. He moved to Atlanta. … [a] friend of mine called me and said ‘Hey man, you know, our friend Chris is competing in Atlanta?'. … I’m there [in the competition] and I see him [Chris] win and it just went off in my head. I said, “You know what? I don’t want to get to the end of my life and say, man, I should have done it.” I said, “Let me just give it a shot.”

On his bodybuilding journey:

[Chris] just didn’t know how he was going to work around the diet part because he’s not a vegan. So, I just made adjustments based on what he would tell me, and what he did, and I would do it myself. And so, I just went to him for posing. But one thing was, [in] particular, he said, “How did you remain so lean eating the way you do?” I was like “I don’t know”

On his competition experience:

So, 2009 April, I did my first show. I got placed 3rd out of 9 guys, so I was kind of like ‘Wow! alright, this is not bad’. He [Chris] helped me with posing and everything, and so I just decided to do another one. I think it was 4-6 months later I decided to do another, just to see if I could do a little better. Maybe I can get 2nd but I ended up getting 1st. [If you place] 1st, you have to do the overall, where overall you compete against the [winners] in the other classes. If there’s five classes, you gotta compete against all of them to get a Pro Card. And so, I competed against those guys and got my Pro Card. [tweet this]

So, my second time around I said “alright, I think we’ve found something here.” So, from that point on, I've been doing it ever since—love the competition. I like to compete but I don’t like to get on stage by myself. You know, I didn’t win anything if I’m by myself—it’s just me. You know, you’re competing against yourself but you also want to gauge yourself against the other competitors that are considered pros, so the second show was tougher. The second show was 16 guys, so it was like, that let me know.

Alright, out of 16 guys who have no idea what being a vegan is, they look at you and they’re thinking, “You don’t eat any meat? You sure no eggs? No butter?” [I answer] “no.” They’re like, “how do you look like that?” So, that let me know, okay I can do this. But i wasn’t even doing it to say, “Hey, I’m vegan, look at me.” I was just doing because I love the competition of getting on stage, and just…it was something I wanted to do, and it finally came back, and I realized I was good at it, so here we are today.

I hope you enjoyed hearing from Torre on his journey. This video was sponsored in part by Cronometer where you can track your fitness and nutrition to ensure optimal athletic performance whether you’re sculpting your own physique or just wanting to check your nutrients. Use this link or the one below to make your own free profile.

I’d love to hear your thoughts on Torre’s unique history. Let me know in the comments!

← 5 Reasons We Don’t Eat Meat [For Kids!]Everything Wrong With Environmentalism In 11 Minutes Or Less!! →