When someone has a health scare, like a possible cancer diagnoses, it usually results in a vow to change habits, eat healthier, start exercising, and more. However, few follow through on such a change of heart and even fewer do what my guest today did: go from a full-blown cheese-loving omnivore to a vegan fitness model, all after the age of 40. [tweet this]

Today I’m excited to introduce you to Crissi Carvalho, better known as vegan fitness model. Crissi has been in the fitness industry since the tender age of 16, and while most people seem to peak at a young age and start the downhill trend towards middle age, Crissi has gone against the grain and is the fittest and healthiest she’s ever been at 42! Just take a look at this mother of two. [tweet this]

Now let’s hear from Crissi about her journey to vibrant vegan health. Be sure to check out the video to hear all of Crissi's story, but here are some choice nuggets:

On her journey to veganism

“Back in around and about 2012 is when I started experimenting with the vegan diet. … However my journey to that started a lot before that. Mainly from having a few health conditions. I had a bit of a cancer scare and my best friend also [did]. We were all around about 36-37 at that stage, so very young. So, having problems with our health and being somebody that’s started in the fitness industry from the age of 16, I found it…well, why is this happening?

“So, I started self-studying and that led to studying nutritional medicine and how foods can actually heal our bodies. So, I started the chemical route. I took out chemicals, preservatives, additives – tr[ied] to stick to more of whole food[s]. I wasn’t vegan at that stage.”

On how she overcame her resistance

“It was a bit of resistance on my side because born in Germany–I’m European. I loved cheese and I was a very big meat eater so that was not a problem at all. And so yeah, so gradually that led me over to become a vegan. And the more I learned about veganism the more I realized it was exactly who I was.”

“I never made a connection that beef is cow, and bacon is pig–things like that, which so many people are like that now you know. And it’s not until you put that out there that they have the ah ha moments, and I really feel that … we need to be a bit gentle with people in that respect is showing them the connection. Now I’m an ethical vegan. It probably only took me about a year of transitioning and that’s what’s kept me vegan.  It’s so easy once you reach your own personal health goals … on a plant-based diet. Too easily to go back and have little dibbles and dabbles of cheese here, or milk there, or cake here. But when you head over to the ethical side you don’t even want to partake in that, and that’s exactly what I become. That wasn’t the original…original purpose of me going vegan but wow, it’s forever now.”

On becoming a fitness model

“I started in the fitness industry at around 16 till about [age] 30 and then I became an interior designer. And then … the big world global financial crisis [hit]. I lost my job and I had to really look at what I was gonna be. [C]oming into 36, 37, 38 I was starting again and … I decided to go back into the health industry and the fitness industry. So, I really started on my certifications, studied the plant-based nutrition. And to launch back into my career, and to prove to myself that as a newly vegan, I could be as fit and strong as all my peers, I decided to do a competition which was just last year 2014. So, I had only 8 weeks to prepare for the competition and with all my 13 years…14 years previously in the fitness industry.

“I just modeled my new plant-based nutrition, and my old fitness, so called health new knowledge to get out. Before I knew I have been now competing for just over a year and in that time I’ve done around about 8 competitions, 14 stage shows, and out of those 14 I placed all one in around about 12 of them, and some in the masters category, and it’s been amazing. People have been so inspired by someone that is vegan that can achieve these results in such a short time, but also someone at my age. And I think I’ve pretty much proven, not just to myself but so many, that we don’t need meat protein to build muscles. [tweet this] And because I’ve competed once before…twice before in my 20’s I definitely think this is a better way, a faster way, a more nourishing way to build muscle, and to stay fit.”

I hope you enjoyed hearing from Crissi about her journey back to health and making that connection to the deeper ethical side of veganism.

Now bringing it back to the surface, I’ve had the privilege of seeing the inner workings of Crissi’s fitness coaching programs and she’s been an important part of my own journey back to fitness, part of my dream team, if you will, with Derek from last week’s video and Robert Cheeke’s new book Shred It. And here’s a little peak into my progress. 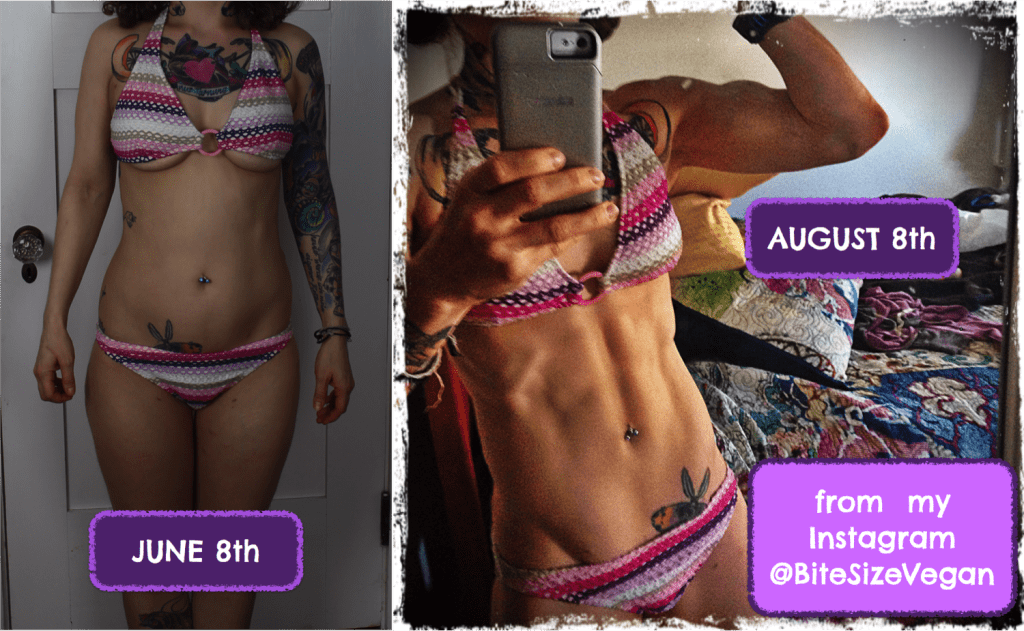 So check out Crissi’s services if you want fitness guidance from a vegan perspective. Her links are below!

This video was sponsored in part by Cronometer where you can track your fitness and nutrition to ensure optimal athletic performance at any age! Use the link in the description or in this article your own free profile.

Now I’d love to hear your thoughts on Crissi’s conversion and kicking all the aging stereotypes in the butt. Have you had any health scares motivate you to reclaim your own life? Do you feel your age makes fitness difficult? Let me know in the comments!