Iodine may not be on your radar immediately when going vegan–it’s a non-metallic trace element most people think of as a pre-surgical topical application, for which it is used.  But dietary iodine is key to the synthesis of thyroid hormones in the body.  The top sources of iodine are foods from the sea and iodized salt, followed by milk and eggs.  So what's a vegan to do?

Today’s video post is the second to last in the “where do you get your___?” vegan nutrition series with Dr. Michael Greger of NutritionFacts.org.  So let’s hear from Dr. Greger on how to ensure you have adequate iodine levels when going vegan. [tweet this]

(and just a note–this video will not be covering the concerning issues surrounding nori production and seaweed farming in general. that will be a whole other video.  Today we’re focusing on the nutrition.)

For Dr. Greger's full answer, check out the video above, but there are some choice nuggets:

“Iodine is important for thyroid function.  It’s found predominantly in the ocean and variable amounts in the soil around the world, but it kind of depends where you’re growing your food, and so back in the 1920’s they iodized the salt supply just kind of make sure everybody gets enough.  So, if you do use salt, if you do add salt to your food use iodized salt.  Not sea salt or mineral salt, or crazy Himalayan salt, or whatever.  The thing’s about 20 times less iodine than iodized salt.  But of course we shouldn’t be adding salt to our foods at all.  Sodium is considered the 3rd leading dietary killer in the United States.” [tweet this]

On the source of iodine in dairy milk:

“It’s actually not in the milk itself, but it’s usually these iodine containing disinfectants–what are called teat dips to prevent mastitis. They dipped the cow’s teat in the iodine containing solution like betadine.  And some of that iodine then leaches into the milk and so, just that disinfectant process can be a source of iodine for milk drinkers.”

On plant-based sources of iodine:

“For people who are eating healthier diets I would encourage people–so you may be getting all that you need just from eating land plants depending on where the plants are grown, but I would encourage people to develop a taste for sea vegetables, kind of the dark green leafies of the sea.  And so for example, a half teaspoon of dulse for example, or arme is all the iodine you need for the day, there’s 150 micrograms.  And dulse is just…you can get it in these little purple flakes, it’s pretty, it’s not very ‘seaweedy’.  So, you can sprinkle a half teaspoon on whatever you are eating and you wouldn’t even know it’s there, you can get all that you need. and also, it’s other good, wonderful trace minerals.

“You do not want to get too much iodine so you wouldn’t want to go over a tablespoon of the dulse or more than 10 sheets of the nori seaweed everyday cause you can actually get too much thyroid function.  The only other thing is it’s particularly critical during pregnancy so I agree with the American Thyroid Association’s recommendation that all women, regardless of what they eat, get as part of their multi-vitamin regimen a 150 micrograms of iodine everyday.”

I hope you enjoyed hearing from Dr. Greger on this.  Our actual iodine requirements are incredibly low with our entire lifetime requirements fitting within one teaspoon.  However, iodine deficiency is prevalent in some countries where there are either low sea and soil levels of iodine and/or if one is eating a purely refined foods diet. 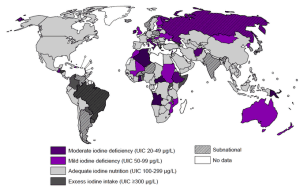 Populations that suffer from Iodine deficiency.

Of course, diets high in iodized salt and fortified foods can lead to iodine toxicity, so it’s best to stay under the upper limit of 1,100 micrograms a day.

And just a comment on the iodine content of milk–if your food gets its nutrients from teat dip, it may be time to reevaluate your dietary practices. [tweet this]

If you want to track your own iodine, check out Cronometer.  Just be sure to go to your profile and minerals tab to select iodine to be displayed.  Because of the variation of soil and sea iodine content around the world, standard iodine content for most foods does not exist.  However, if you are taking an iodine supplement or dulse, as Dr. Greger mentioned, you can create your own supplement entry in Cronometer and see its impact in your nutrition report.

It’s totally free to use and pretty fantastic–so much so that they’re actually sponsoring this video post to get this vital information out to you.  Be sure to use this link to go make your free profile. I don’t get any money when you click on it but it lets Cronometer know that I’m good at pimping their product.  Which I may have…just completely negated…with that phrase.

Now I'd love to hear from you on this! do you have concerns about iodine in your diet?  Have you experienced any thyroid issues linked to iodine?  Has being vegan or not impacted this?  Let me know in the comments!

Track Your Nutrition With Cronometer

Thorough Article on Iodine from the Linus Pauling Institute