Today is the second video in the new vegan athletes series and I’m excited to introduce you to a brutally honest spitfire of a woman, Samantha Shorkey.

Samantha is a two-time winning vegan bikini athlete, certified personal trainer, the first-ever vegan WNBF bikini pro and author of “Jacked on the Beanstalk: Plant-Based Fuel for Vegan Athletes”. A journalism graduate and meat-free since eight years old, she shares her tips and experiences via her blog and is also a member of the Plantbuilt vegan muscle team and a featured blogger at MeatFreeAthlete.com. [tweet this]

And not to negate the value of her impressive resume, but she’s kind of a babe: [tweet this] 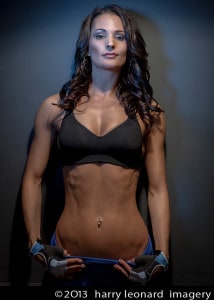 For those of you not familiar, bikini competition is one of many divisions of competitive female bodybuilding and looks for more of a lean than overtly muscular body.

So enough of me yammering on, let’s talk to the newly pro Samantha Shorkey about how she came to be a vegan bikini competitor.

On her vegan journey:

“It’s been a long time since I’ve eaten meat. I went vegetarian when I was 8 years old. and basically I went vegetarian at such a young age because I grew up in the country. My parents live in a log house on 12 acres of forest and spent a lot of time outdoors. We had 40 or 50 deer in our backyard, kind of everyday. My mom would feed them and I just always loved animals, so much that when I was 8 years old, I kind of said, ‘why do we eat them when we love them so much?’, and I made the decision to stop eating them.”

“I went full vegan in 2011, when I moved to Vancouver, which is Canada’s vegan heaven. And I learned more about what was going on in the dairy industry, and eggs as well, and realized that, hey I’m still contributing to the problem. I learned all kinds of new ways to cook that didn’t involve dairy, and that there was just as many awesome desserts without the eggs. Ever since, I’ve felt better than ever.”

On her bodybuilding journey:

“I’d always, I guess been pretty fit, with started doing Billy Blank's Tae Bo videos at home–VHS of course–years and years ago. I started dating a personal trainer about 4 or 5 years ago, and he taught me a lot about the gym, and how to lift weights kind of thing. Then after we broke up, I was like, ‘you know, I think it’ll feel pretty good to take it to the next level’, and see how I can do competing. Then I started Googling ‘vegan bodybuilding’, and you know, plant based bodybuilders, and there was some men like Robert Cheeke who’s, you know, the legend godfather of vegan bodybuilding. But there wasn’t a whole lot of information on females, and specifically, vegan bikini competitors. So, I was like, ‘huh, maybe I should see how I can do on my own here’, and I can be that person to provide some info for other girls who decide to pursue the same goal.”

On the reactions she gets as a vegan athlete:

“I think it all boils down to you can’t argue with results. And my first year of competing when I started putting myself out there before I’d ever even down a show, I was getting pretty mean comments on, you know, I’d post a before and after, and I’d have random strangers telling me I looked anorexic or a skeleton, and you know, ‘Go eat a steak! She needs to eat a steak!’. And then, as luck would have it, my very first show was an untested show. I was going against girls on fat burners and hormone blockers, and some on steroids, and Anavar, and all these different things, and I won first place as a vegan in my first ever show. After that, it’s amazing how I rarely hear people say anything negative and I’ve just been on a pretty winning streak ever since.”

“More than anything people are just really fascinated and they want to know how I do it. And you know, of course the million dollar question that we all get, ‘Well, what do you eat for protein?’, you know, but there’s protein in everything and I eat a very typical bodybuilders style diet. It’s just [that] I replace the dead animal with plant based options and if anything, I feel like it works better because my digestion runs smoother. I know girls who compete and they’re constipated for days and days and days because all this animal protein is clogging up their intestines, whereas I’m like, ‘ahh!, I definitely do not have that problem’.” [tweet this]

I hope you enjoyed hearing from Samantha on her journey to being a pro vegan bikini competitor.  Stay tuned for more with Samantha in this series including what she eats in a day and her thoughts on body image in the bodybuilding community.

This Saturday, June 6th, Samantha has her pro show debut in Austin TX, as part of the Plantbuilt team!

Now I’d love to hear what you thought about Samantha’s story- let me know in the comments!

← How Many Animals Do We Kill Every Year?The Freelee & Gary Yourofsky Controversy: Death to Non-Vegans & Human Hating? →