Strength and physique athletes and in particular, bodybuilders, tend to think that it’s impossible to build serious mass while eating vegan. Well, today my massive guest shares his epic whole-food vegan protein mass-building shake recipe and what he eats to bulk up even with a raging metabolism. [tweet this]

Today is the second video with the incredibly built natural vegan bodybuilder and aptly names Derek Tresize who with his stunning wife Marcella Torres run veganmuscleandfitness.com and own Virginia’s only plant-based personal training studio, Root Force Personal Training, the name of which I so enjoy. 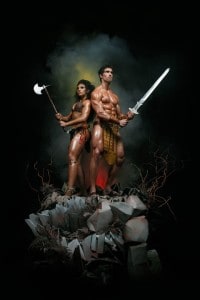 If you missed my first interview with Derek be sure to check it out to hear how this former meat head who’d make fun of vegans became a literal force within the vegan fitness community. Today, Derek is going to share what he eats to maintain his physique, including his rather unique epic vegan protein mass-building shake.

Be sure to check out the video for Derek's whole approach to bodybuilding nutrition and epic shake creation, but here are some choice nuggets:

On inventing the bean shake:

“I’ve kind of coined the term, ‘bean shake’. I think I’m the first guy ever to put beans in a smoothie.

“It was in 2010. I was trying to bulk up for the first time ever. I had always been athletic and everything, but never been like, ‘I want to gain the weight’. … And I was looking at, you know, there’s supplements called Weight Gainers where you have these shakes that are just packed with calories. But I didn’t want to take a supplement and there was nothing like that that was offered for vegans anyway. … I have a fast metabolism and I figured out an easy way to get more protein, and just get more calories into a smoothie was to add beans to it.

“Beans pack a lot of ‘oomph’. They have a lot of protein. They have a lot of carbs. They’re pretty calorie dense. And I found out if you use white beans like cannellini beans or great northern beans they don’t affect the flavor at all. … So, I took smoothies where I would normally have bananas, peanut butter, and soymilk, and berries, and spinach. … I started putting in a cup of white beans as well and all of a sudden I was adding a couple hundred calories to the smoothie, and you know, 20 grams of protein in it. It was starting to look…it had the same statistics as some of these weight gain shakes but it was all whole foods. … I think I gained 10 pounds within the first month. My weight just shot up and I wasn’t getting fat either. I was putting on muscle so it worked really well for me.”

On his calorie requirements:

“I’m generally eating between 4 and 5 thousand calories a day. And if I’m doing an extreme diet right before a contest where I cut my calories way down, I might get down to 3,000 [calories] which is a lot for most people. It’s not very much for me. So, it’s primarily…I would say it’s 90% whole foods. You can [have] treats once in awhile.”

On his nutritional philosophy:

“I tried a lot of different dietary styles. I think as a lot of physique athletes have. I tried an 80/10/10 diet. … I did the super high protein diet for awhile, especially when I was first bodybuilding. I tried to get a gram and a half of protein per pound of body weight which is a whole lot. … I do track my macros. I do track my calories almost everyday. Not perfect[ly], unless I’m right before a competition.

On what he eats on a typical day:

“I’m not one of those who are on a set meal plan everyday. Although I’ll do that before a competition but I do have a few meals that are exactly the same.”

Here's what he eats in a typical day: [tweet this]

Place the ingredients in a blander, blend to the desired consistency.

check out his ebook for more specifics and recipes!

I hope you enjoyed hearing Derek’s approach to building an epic plant-based physique using the power of whole foods. You can’t really tell him it doesn’t work! 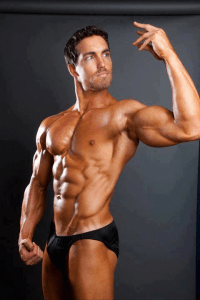 This video was sponsored in part by Cronometer where you can track your fitness and nutrition to ensure optimal athletic performance and log your epic bean smoothies. Use the link in the description or up there to make your own free profile.

If you want to connect with Derek, see his links below–his website even offers a free diet planner and you can have him and his team write custom meal plans and training regiments for your own fitness goals or nab his ebook on the behind the scenes of step-by-step contest preparation for men and women alike.

I’ve personally worked with Derek and he’s been a vital part of my fitness journey, giving me pointers, tips and tweaks to my own inexpertly-written fitness routine. And I’d say I’m getting results (though I'm not at Derek's level by any means!) 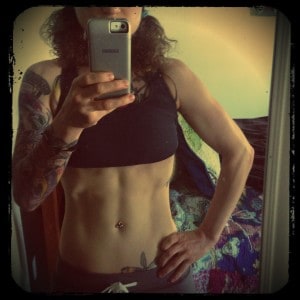 Yes, it's a selfie. Forgive me.

Now I’d love to hear your thoughts on Derek’s smoothie to end all smoothies and his approach to his meal plan in general. Have you ever had a bean smoothie? If you’re not vegan but interested in building mass and starting a plant-based diet, did this help you find possible ways of accomplishing that goal? Let me know in the comments!