we all knew this day would come… (Well, at least I knew…and those of you who follow me on social media.) This series is all about vegan athletes and he's a vegan who talks about athletes…a lot. If you’re on YouTube and have a pulse, then you know his name. (Or at least his channel’s name. You may not know his real name.) It’s Richard…. it’s time. To interview. Vegan gains! [tweet this]

The most trending, fastest-growing and most polarizing vegan channel is that of Vegan Gains. 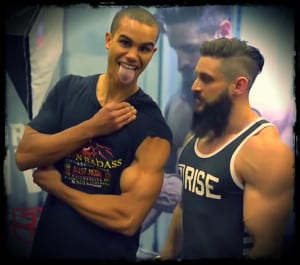 He came on the scene on Decebmber 14, 2014, almost exactly six months ago, and exploded to where he’s now at almost 55,000 subscribers, which he may have blown past by the time I post this. (Already happened, as of this typing he's at 56,295) and on the first day of 2015 he launched what is now his flagship series, the worst of the fitness industry.

So of course when I interviewed Richard, we had to address this viral and incredibly controversial series. 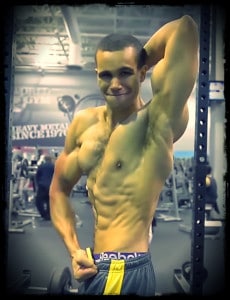 To hear Richard's full responses, be sure to watch the video, but here are some choice nuggets:

“I went vegan about 4 years ago. It was back in April, so a little over 4 years now. I watched a Gary Yourofsky video, somebody linked it on Facebook. I’d never heard any great arguments about going vegan until then. All the vegans I knew, they were like, ‘oh, you have to end animal suffering and everything’. I was a little disconnected back then. I didn’t really get it, the whole animal suffering thing and I thought you needed to eat meat for health, so I thought that kind of justified it. And then I watched Gary’s video and it just totally flipped things around. He made me get more of an emotional connection than I’ve ever had before and I also never knew animal products caused heart disease, diabetes, cancer, and then I ended learning about doctors T. Colin Campbell and Caldwell Esselstyn.  And then just, right that day, [I] went vegan.”

On the fitness and bodybuilding industry:

“The whole bodybuilding thing, that’s what it really is … it is just such a negative thing for people, not only health-wise, but just mentally. And if you look at the comments it’s a lot of younger kids in their teens and early 20’s who are saying, ‘your arms are so skinny’- my arms are literally bigger than my head and they’re calling me skinny. They’re causing like, mental illness and they really need to be called out for this. …

“I get messages [from] a lot kids saying, ‘Wow, you really opened my eyes. I didn’t realize I had an eating disorder until now’. They actually don’t know that they have eating disorders and these people are driving these crazy, retarded, starvation diets, and they’re taking steroids, not telling people. They have these massive f@#kin arms, huge shoulders and they’re injecting Synthol, and it’s all fake. Everything is fake and people think it’s real, and they’re just going after this stupid ideal body image, and just really ruining their entire freakin' lives up. They really need to be f@#ckin called out. People say I’m harsh but they’re literally ruining lives. They’re shortening their lives just from all the meat and crap they’re eating but just from a mental health [perspective], and just general all around quality of life, it’s just terrible.” [tweet this]

On the importance of peer-reviewed research:

“You can have the worst diet imaginable and still lose weight. There are people who have lost weight on Twinkie diets. Literally, there are studies done on Twinkie diets and people have lost weight, lowered their cholesterol, and all that. Obviously Twinkies are unhealthy, and especially when you factor in, these people are insanely genetically gifted. They’re just in the top top genetically, forget steroids, they’re still…even if you take all the drugs in the world, you’ll never get like them. Plus, they have an insane amount of steroid use and an insane amount of hard work, and they’re just so mentally driven to do this. You factor in all those things together, these anecdotes just really don’t make any sense. So, it’s really best to rely on the scientific data because they’re just so far out of anyone’s reach, their genetics, their steroid use, their hard work. It’s just not going to apply to you so…yeah, focus on the research, something empirical that you can actually measure rather than just these crazy people who just don’t…you know, come anywhere close to you at all. You should just focus on the research.” [tweet this]

On why he quit competitive bodybuilding:

“It was more of a gradual thing. The last show, I really tried my absolute hardest to do my best for that show. And you know, it’s such a mental drain on you, like dieting…anyone can throw weights around in the gym, that’s easy, but dieting for a show. I don’t think anyone who’s ever competed before just understands how insanely difficult it is. You just have to take it to the absolute limit and those days leading up before the show, you literally think, you’re not going to make it, and you feel like you’re going to die. I can normally curl 60 pounds—but a few days before the show I can only lift 20lbs, and I looked strong, but [at that point] you are…just dead from dieting. And I just didn’t want to go through that again. My eyes were opening up to what the industry really is.”

On his goals for the Worst of the Fitness Industry series:

“I just want people to realize that just because these people look good and they seem nice, they’re not really trying to help you out. They want to sell supplements. They want to sell their lifestyle. They want to get money from sponsors. And all of this is just completely unrealistic. I think people should just focus on health and if you want to be athletic, and go after some real athletic goals, then you shouldn’t really be focusing on these bodybuilders because they’re not really athletic. They’re really out of shape, really. If you take a look, especially leading up to the show.

“A lot of people say it’s about jealousy, that I’m doing it or it’s about hating on people, and it’s not jealousy. I’m not jealous or…I don’t really even necessarily hate any of these people. Some of them, I think they really do believe what they’re saying, and people just need some perspective. Just look at the videos objectively. I just want people to open their eyes and just see the other side of things, and see what’s really going on behind the scenes.” [tweet this]

I hope you enjoyed hearing from Richard on his flagship series. If you don’t like the way he approaches his activism or feel he’s too harsh, I’ll reiterate my thoughts from my controversy video: Go do your own form of activism with all you’ve got.

To paraphrase Gary Yourofsky’s paraphrasing of what Martin Luther King Jr. said when asked to stop Malcom X’s violent rhetoric, Vegan Gains will stop being so insane when the fitness industry stops being so insane. You want to shut him up? Help end the cruelty and misinformation he’s reacting to. Be proactive. Be active, period.

Now I’d love to hear what you thought of the interview and Richard’s approach to activism in the comments below.

← Just Say NO To Milk [For Kids!]How to Be Vegan in the Military | Sergeant Alexander Contreras →