In my quest to find a vegan in the military to speak to the unique challenges such a person comes up against, I came across an article by then Specialist Alexander Contreras. now Sergeant Contreras, Alex, as he prefers to be called, was incredibly generous with his time to sit down and speak to his personal experience as a vegan in the military and hopefully help others in the same situation.

On his vegan journey

“It’s kind of a long story but just to make it simple. I think when I was around 11 or 10, I watched Finding Nemo–there was a line in there that says, ‘fish are friends, not food’. And that always stuck with me, and I would always think about it as I was eating chicken nuggets or something like that. Then, my mother passed away and that kind of like…gave me time to think about certain things as far as death, and things like that. So, at the age of 17 I came across the video ‘glass walls’, and that made me go vegetarian for about a month. Then, I saw something on my timeline on Facebook. It was the documentary, well, a trailer of the documentary ‘Earthlings’. So, I decided to go to Earthlings.com and watch it, and that instantly, that day I was like, ‘I’m going vegan’. I couldn’t contribute to that.” [tweet this] 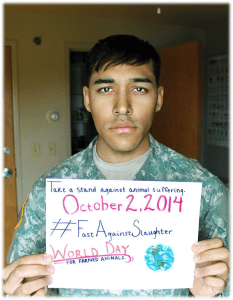 Sergeant Contreras Participating in a Fast for the Animals

On why he joined the military:

“Around that age 18 [or] 17,  there were rough times happening inside of the house. due to my new found religious views–I’m agnostic now–and my new, I guess, philosophy about animals my dad didn’t agree with me being vegan. And it was just kind of messing up our relationship so I decided to leave the house, and I ended up living under…I guess a place called ‘Beltway 8’, I call it the bridge but it’s actually a highway or a freeway. Then, after a month I moved in with my uncle and then on January 2012 is when I shipped out to Fort Benning, GA to go to infantry training.”

On his basic training experience:

“When I got there, I figured that I wasn’t going to eat and I was right in a sense. So, they have MREs [Meal, Ready to Eat] in the morning before you go to religious service. Back then we were just tired and you just want to relax, you end up going to these religious services. So I went to a Buddhist service. And in the morning you don’t get hot chow…if you’re quick enough you can, but even if I did try to get the hot chow, there wouldn’t be nothing for me. There’s eggs, bacon…yeah all of that stuff. And MREs, they only have a vegetarian option not a vegan option, and the only thing in there you can eat are crackers. So, I do want to get in touch people that can possibly make MREs for vegans.

“And when I did get to the chow hall they had a salad bar…with raisins and apples, but we gotta be realistic here. I’m not going to live off of raisins and apples healthfully. Yeah, that’s how it was for those specific days–I went two weeks without eating but I’m not going to blame the cadre or the drill sergeants or anything because I didn’t want them to know. When you’re new to the army you’re just…you have a fear of the drill sergeants, so you’re not going to let them know that you’re vegan. … [S]ometimes my buddies would give me an orange or something but yeah, the FTX [field training exercise] at the last part of the cycle I starved for an entire week.”

On the reaction of military leadership to his vegan diet:

“I’ve had a lot of leadership as far as platoon sergeants and team leaders just because i’ve been in for 3 years now. I've also just become a sergeant, so I also have duties as well as leadership. I had one…I’ll just go ahead and shout out his name: Staff Sergeant Gouge. He went through hell trying to get me food when we were in the field. He would contact the company commander and say, ‘hey, we have someone who has special diet needs’, you know, just not to make a fuss about it.

“They’d say ‘vegan,' but then they wouldn’t understand what that was so they’d have to say vegetarian, but doesn’t eat cheese or dairy, or honey, or anything like that. So, there were people inside of my company and my battalion that would look out for me. And then there were some that couldn’t give a rat’s ass, excuse my language.”

On how his fellow soldiers react to his vegan diet:

“I do get crap for it…sometimes. But I have made friends within my platoon, within my company and battalion that get it, and understand it. Some even said they wanted to try it. In the barracks room–cause I’ve lived in the barracks room–I cook and I’d feed my friends vegan food just to expose, and kill that stigma that vegan food is ‘blah’. they think vegan food is tofu and iceberg lettuce for some reason. But i showed them that they can have everything that you can have when you eat meat, but without all the death and murder. So they’ve been okay with it and then there’s some that just absolutely don’t understand it at all. And sometimes it gets difficult to repeat myself, and describe what it is or why it matters, but…yeah, we have some work to do.” [tweet this]

On the vegan taboo in the military

“Yeah, there were some that had seen it as…like a taboo and I want to abolish that in the military. There’s some things that vegans need that, you know, I’d say Muslims can get or Jewish people can get just based on a belief, and ours is a philosophy, not to be offensive, but based on fact. And we still can’t get certain needs met unless somebody higher up stands for us, and sometimes that’s not possible.”

On dealing with non-vegan MREs:

“I learned the hard way. My first field problem was an entire month. It was in 2012 and I didn’t bring any food actually…I was like ‘they’ll have hot chow. They’ll bring green beans or whatever’, and they did…occasionally. And when they didn’t we had to eat MREs and obviously there are no MREs that are vegan. …  [C]ommand Sergeant Major Hackard who was the battalion commander at that time, he actually introduced me to vegan Ramen [noodles]. … He didn’t really ask why are you vegan or anything. He just…he had an eye out for me. …

On his advice to vegans in the military:

“I get a duffel bag, it’s a military green duffel bag. The new ones zip from the sides so they’re more convenient. You can bring all the snacks you want, just load it. And don’t be afraid that your chain in command is gonna be like ‘you can’t pack that on the striker’ or whatever vehicle you ride in to go to the field problem because you can bring as much snacks as you need. If anybody tries to make a hassle of it there’s open door policies. Just bring it to the next chain of command.” [tweet this]

On his greatest vegan victory in the military:

The greatest accomplishment I would have to say is just making small amount of people in the military understand what veganism is because a lot of people haven't even heard of the word vegan until they met me. And when they told me that, my buddy Miguel, he told me that he didn’t know what vegan was until he met me. And now he actually craves a vegan menudo as opposed to the traditional Mexican menudo, so, that was awesome when he told me that. And also another great accomplishment is I won the ‘peta2’s cutest vegan alive’, so I thought that was cool. I really don’t think I’m that attractive but I guess people thought I was attractive so that was awesome. And, yeah having this interview.”

On having to “prove” he was vegan to get separate rations:

“I don’t know if this is a great idea but maybe the viewers can put their input. What would they think if we made–in the military at least–vegan a religious belief but not in the sense as Christianity. We practice it everyday, and it is, in a sense, it’s a belief based on factual things that occur in real life. … It’ll be easier for vegans in the military to say, you know ‘I’m vegan’, and be able to put it on the application without having to prove anything, it’s on their dogtag. And that way also, if they have to get anything administered to them they’d have a vegan option. I think it would be pretty good, but that would be nice if your viewers can touch on that.”

I hope you enjoyed hearing from Alex on his experience of being vegan in the military. I certainly hope that this has been helpful to those of you in or interested in entering the military who are vegan or wanting to go vegan. His contact information is at the foot of this post.

I personally find it frustrating, as Alex has expressed, that religious preferences or allergy-based dietary restrictions are honored while moral objections are not. This is the case in many institutions unfortunately. But my hope is that people like Alex can help create change from within the institution itself.

I'd love to hear your thoughts on this matter, especially Alex’s question to you about what you think about classifying veganism as a religion. Let me know what you think in the comments.

My thanks to Sergeant Contreras for his time and advocacy.

Featured Videos:
Do Fish Feel Pain?
Being Vegan in a Non-Vegan Family
The Impact We Make
Vegan Athletes Show How It's Done