Horse racing is all about the thrill. It’s about the speed, the rush, the adrenaline, the challenge, the sound of hooves pounding the track, the sight of extreme physical exertion, the pushing of boundaries human and horse alike.  And more than anything else, it’s about the money.  Above all else, horse racing is a business and a multi-billion dollar one at that.  It’s not for the love of the sport and certainly not for the love of the horse, it’s for the love of money.  This video post is the third in my series on horse ethics.  In the first, we looked at horse riding in general and the musculoskeletal damage it causes and in the second took a close look at the effects of the bit in particular.  Now, not everyone can agree on the ethical nature of horse riding itself, including many vegans.  But horse racing takes the commodification of horses to a whole other level that should even give the most staunch non-vegan pause.

With money as the priority, horses are treated as no more than cash machines.  This so-called sport is rife with cruelty on so many levels and I’ll do my best to touch on as many of them as possible.  Please see the list of resources at the bottom of this post for further studies and articles.  The cruelty of horse racing begins long before the track.  Racehorses are genetically manipulated and bred to run as fast as possible.  Their lives begin at a stud farm where mother horses are kept pregnant 90 percent of their shortened lives through the use of drugs like Prostaglandins and the alteration of their environment in order to manipulate their natural cycles. Once born, potential racehorses are ripped from their mothers, who are immediately impregnated again until they can no longer produce foals and are sent to slaughter.

Having been separated from their mothers, these newborn foals need sustenance and are nurse by “nurse mares”–horses with lower pedigrees who are impregnated simply to produce milk for the racehorse foals.  The children of the nurse mares are of no use to the industry and as it’s illegal to send foals under six months to slaughter, many are killed by a brutal clubbing or are simply left to starve to death.  They are then skinned to produce high-end leather products, termed cordovan leather, and their meat often sold for human consumption.

A 2009 report from the Jockey Club stated that approximately 49,817 mares were bred that year, meaning approximately 49,817 by-product nurse foals were needlessly slaughtered.  And that’s only in the United States.  This horrific cycle of forced pregnancies, stolen children and premature death closely mirrors the dairy industry, wherein mother cows have their calves taken at birth and slaughtered for veal so that humans may consume their milk.

Being bred as a potential racehorse does not save the other foals from a similar fate.  Out of the hundreds of thousands of potential racehorses bred in multiple countries every year, only 5-40% will go on to race.  The remainder are either sent to slaughter for human consumption or pet food, re-entered into the breeding industry, or sold for lower-tier racing, which has even less regulations and safeguards.

While the consumption of horse meat has long been taboo in many societies with even regular consumers of other animal products balking at the idea of eating horses, what many people don’t realize is that horse slaughter is simply the back-end of horse racing.  Just as the egg industry has no use for male chicks and grinds them up alive or gasses them, so too are the horses not deemed fit enough for racing discarded as industry waste.

For those horses who make the cut to race, it’s just the beginning of a tortured existence.  Race horses typically begin rigorous training when they are around 1.5 years old, long before their bodies are fully developed and their skeletons mature.  According to the text Practical Anatomy and Propaedeutic of the horse, the length of time for complete growth of the epiphyseal plates, or cartilage, is not until they are (on average) between 6 and 9 years old.  The extreme training demands put on these vulnerable young horses leads to a tragic preponderance of fractures and breakdowns, leaving them finished by the age of 4-6.

These injuries, more often than not, seal a horse’s fate as they are deemed to expensive and troublesome to treat.  On average, 24 horses die per week on racetracks across the United States, with numbers in Australia as high as 68 per day or 25,000 a year.  The injuries aren’t all external breaks the demands of racing cause a large proportion of horses to bleed into their lungs and windpipe, called exercise-induced pulmonary hemorrhage, with a University of Melbourne Study finding that 50 percent of race horses had blood in their windpipe and 90 percent have blood deeper in the lungs.  Their high concentrate diets of grains also leads to gastric ulcers with a study in the veterinarian finding them present in 89 percent of horses with many of them developing deep, bleeding ulcers just within 8 weeks of the commencement of their training.

When not tossed aside as too expensive to treat, injured horses are pushed to keep racing with the aid of dangerous drugs.  Pain medication can mask injury, allowing wounded horse to run harder, further endangering their lives- as many as 90 percent of horses that break down have pre-existing injuries.  Journalist Max Watman explains that because “thoroughbreds are bred for flashy speed and to look good in the sales ring … the animal itself has become more fragile” and that “to keep the horses going,” they’re all given Lasix (which controls bleeding in the lungs), Phenylbutazone (an anti-inflammatory), and corticosteroids (for pain and inflammation).

Injured horses aren’t the only ones drugged, however.  Former public relations manager for Churchill Downs, Alex Straus, says, “there are trainers pumping horses full of illegal drugs every day.  With so much money on the line, people will do anything to make their horses run faster.” This includes chemicals that are made to bulk  up pigs and cattle before slaughter, cobra venom, Viagra, blood doping agents, thyroid medications, stimulants, and cancer drugs, among others. 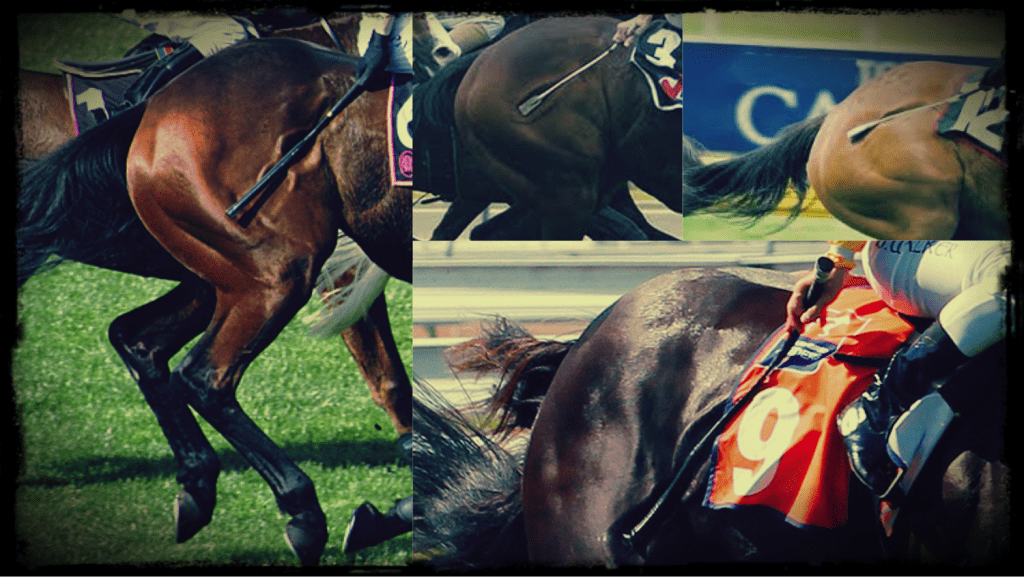 In addition to being chemically pushed to perform, horses are brutally whipped during races in what is probably the most public and socially endorsed form of animal abuse today.  The racing industry assures that whips must be padded and when used properly only stimulate a horse, not cause pain.  However, according to a study by professor and veterinarian Dr. Paul McGreevy, the padding failed to protect horses in 64 percent of strikes and 83 percent of whip impacts showed visible indentation of the skin, with some 75 percent of strikes hitting the horse’s flank in contravention to the International Agreement on Breeding, Racing, and Wagering.  He also found that 70 percent of strikes were delivered “backhand” and were thus not counted under the rules limiting the number of strikes.  In many countries, the number of strikes is only limited until the final 100 meters, wherein horses may be whipped ceaselessly. 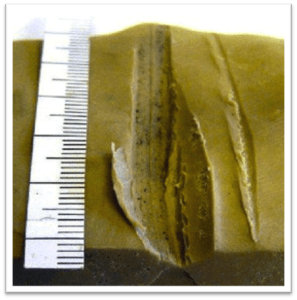 A piece of ballistic plastic consistent with a horse’s flesh shows the damage from a standard single whip strike.

This piece of ballistic plastic consistent with a horse’s flesh, shows the impact of a standard single whip strike.  Dr. McGreevy himself took this further and did a thermograhpic study of his own leg after delivering a standard blow to his thigh. 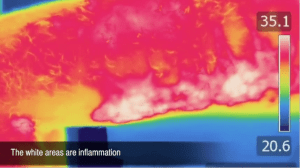 Thermographic image showing the blow from a single whip strike.

These white areas show inflammation 30 minutes after the single blow.  Whip proponents argue that horses are much larger animals than us and have thicker skin and a higher pain tolerance. There is nothing to support this claim and McGreevy points out that horses can feel even a fly land on their skin such that it triggers a characteristic shake called the “panniculus reflex”.  It is rather naïve to assume being beaten repeatedly with a blunt object is a pain free experience.

Racehorses are also subjected to the use of metal bits, and it’s important to note that bits used in racing are even more severe than those used for equine sports.  Horse whisperer Frank Bell states that, “racehorses have bits in their mouths pretty much their whole lives… a lot of jockeys actually balance on the horse’s mouth so often [its mouth is] destroyed…”

When off the track, race horses in training are stabled for the majority of the day.  This is the most practical way to “store” a horse, however, this isolation robs them of social and environmental stimulation.  Stabled horses can developed neurotic behaviors such as crib-biting, wherein they bite on fences and other fixed objects, as well as swaying back and forth and self-mutilation.

After all of this pain and suffering, you’d think that racehorses would be rewarded in the end, especially the champions.  But these animals are treated as disposable commodities, regardless of their achievements.  When a horse is no longer able to perform or his or her performance is no longer deemed adequate, he or she tossed aside like so much garbage.  Those who break down on the track are euthanized on the spot and sent off to rendering plants for pet food and byproducts or simply dumped in a junkyard like racehorse “teller all gone,” whose body was left near an old toilet after breaking a front leg during a race.

Those who don’t die or are killed on the track are sometimes downgraded to lower-level racing, like jump racing, which caries up to 20 times more fatalities than flat races and has far less regulations and standards.  The final destination for most failed racing horses is slaughter, where captive bolts are often sloppily and ineffectively used, prolonging the painful and terrifying death of these long-abused animals.  Even champions who won their owners hundreds of thousands of dollars are sold for a pittance.  In the United States, these horses face the additional horror of several days travel to Canada with no food, water, or temperature regulation.

From cradle to grave, racehorses live tortured, terrifying, brutal, and completely thankless lives. This is what happens when money is placed above the lives of sentient beings.  This is the true face of the so-called “sport of kings.”

Let me know what you think about this topic in the comments!

The Other Video Posts of the Horse Ethics Playlist:

The Effects of the Bit

Racing from Another Perspective: Experts' Statements about Racing

Whip Use by Jockeys in a Sample of Australian Thoroughbred Races—An Observational Study by Paul D. McGreevy, Robert A. Corken, Hannah Salvin, and Celeste M. Black

Melbourne Cup: “Owners” love you when you win. When you die trying, it’s “unfortunate”.

Milk of Death: The Dark Side of the Nurse Mare Industry by Jane Allin

From Kentucky Derby to dinner plate: how to end the horsemeat pipeline by Edward McClelland