in our fourth reason to go vegan, we are actually going to cover several topics: all the way from solving world hunger and decreasing national debt to your colon. strangely, i have had people ask `how do you plan to feed the people of the world if we were all vegan?’ believe it or not, that’s the only way that we can feed everyone in the whole world. only 35% of the world’s people can be fed on a meat-based diet, while a plant-based diet could feed everyone. 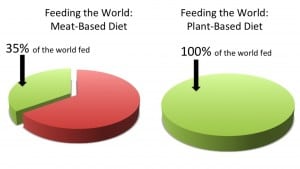 resource-wise, the vast majority of our water and our food go to feed our food. it takes nearly fifty times more water to produce a calorie from beef as it does from potatoes. the amount of vegetable protein fed to the u.s. beef herd would feed almost the entire populations of india and china – that’s over two billion people. in the united kingdom ninety percent of the animal feed protein concentrates come from poor countries, often where children are dying from starvation. the reason so many people can’t put food on their tables is because we continue to put meat and dairy on ours.

plant nutrition costs a lot less than animal-based nutrition. while lean beef runs about $4 per pound, extra firm tofu is $1.25 per pound. many types of beans only cost pennies per serving and can make for a hearty vegan meal.

astounded by my incredible banana beauty? most co-ops and grocers offer ready to eat bananas at a discounted price, often under 50c per pound.

let’s talk about the reason that is probably most important to my fellow americans out there – convenience. in general, we don’t like to put out more effort than is absolutely necessary. but wait, isn’t being vegan completely complicated? doesn’t it take hours to prepare a meal? now, if you’re not going to do it to save time, save money or to save the hungry people of our world, do it to save your own ass. a lifetime of straining to pass stool that are not softened and bulked up by fibre can eventually balloon pockets out in the weakest points in the walls in our colon. these bulging out pouchings can get inflamed, infected and even lead to life threatening ruptures of our intestines.

more than a hundred thousand americans are hospitalized every year for this preventable condition. here in the united states of constipation, we americans are literally `full of shit’ – i mean, think about it… waste matter is exactly that – waste; and just like you wouldn’t like garbage sitting around and accumulating in your house, you don’t want waste matter taking up residency in your colon. hands down, vegans win for frequency of pooping.

in 2011, a team of scientists at oxford released the results of a study in which 15,000 vegetarians and vegans were followed for nearly a dozen years. compared to meat eaters, vegetarians had 35% less risk of being hospitalized or dying from diverticulitis and those eating vegan appeared to eliminate 78% of the risk. what is most surprising is that even after controlling for fibre intake, those on plant-based diet still had significantly lower risk, leading the researchers to suggest that meat itself may increase the risk of a diverticular disease “by altering the metabolism of bacteria in the colon, which could lead to a weakening of the colon wall…” while your colon’s health may not concern you or those around you, your colon’s by-products certainly do. you sometimes hear people say `oh, those vegans they think their shit doesn’t stink.’ well…

so, there you have it – save the world, save a buck and save your ass.

for more information on how severe the drain of resources is for the production of animal products, go here.

a great text about the resources used for animal products is Comfortably Unaware: What We Choose to Eat Is Killing Us and Our Planet by Richard Oppenlander

For loads of information on a vegan diet as the solution to world hunger, please visit A Well Fed World

← Is It Moral to Eat Meat?The Myth of Vegan Conformity | Are All Vegans Alike? →