There’s a reason we pay others to kill our animals for us. And there’s a reason why the process is kept hidden. If people could see what really goes on inside a slaughterhouse, the world would have a lot more vegans. Activists around the world risk going to prison in order to reveal what the industry doesn't want you to know. And the activists you'll meet today risked everything to expose the horrific process of Australian pig slaughter. They entered the belly of the beast, locked themselves in the gas chamber, and shut down the slaughterhouse. [tweet this]

I have a video post called “The Nicest Way to Die,” which shows what is heralded as the most humane method of slaughtering pigs. The footage is from slaughterhouses in Australia but the method of carbon dioxide chamber stunning, is employed worldwide. You can see this PDF for a list of countries that have purchased gas chambers from the very same manufacturer (Butina).

The activists you’re about to meet are part of Animal Liberation Victoria who, with Animal Liberation New South Wales, risked their freedom to obtain this undercover footage and their safety when they climbed into the gas chambers to shut down the slaughterhouse and expose the latest humane lie. [tweet this] 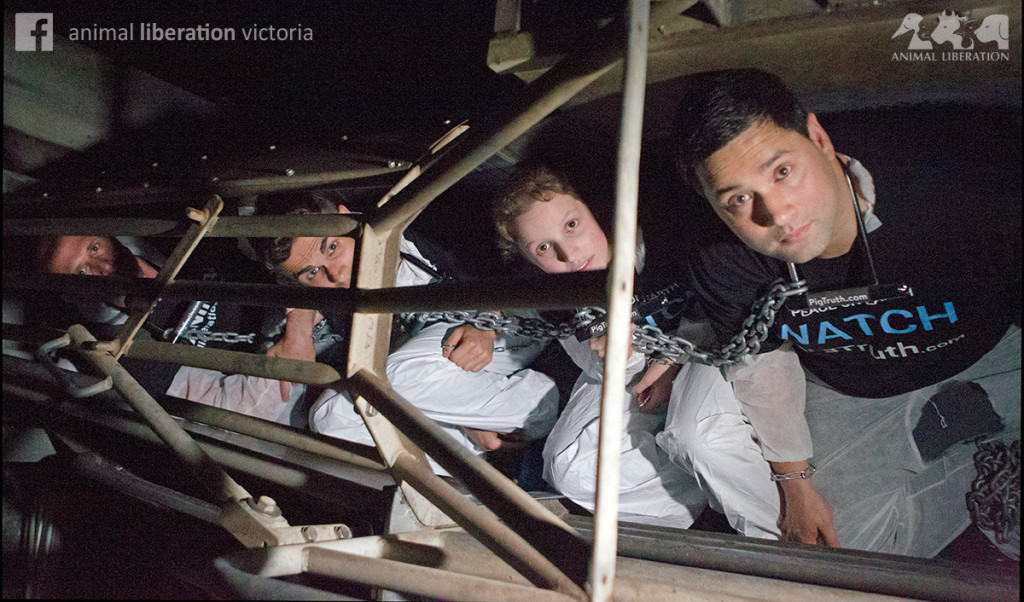 I had the honor of speaking with Kristin, who was a part of the group on the outside of the slaughterhouse and Tim who was one of the activists chained inside the chamber itself. I show behind the scenes footage in the video above but nothing overtly graphic I highly encourage you to watch The Nicest Way to Die to see the truth they risked so much to expose.

Kristin first spoke to the genesis of this action:

Kristin: “Patty Mark, the founder of ALV, has been wanting to do a slaughterhouse action for quite a while, so she wanted to tie it in with, you know, the celebration that many people have in Australia of being Christmas. When obviously it’s a time where there’s a lot of, sadly a lot of pigs on people’s plates at that time of year, and try to draw that connection – people celebrating peace, apparently, with violence on their tables.”

Tim: “[It's] to shine a light on this idea of humane killing, these places, you know they claim that their humanely killing pigs, and I don’t know if you saw the footage but it clearly shows that, you know, that they’re being terrorized There’s a lot of fear and suffering that goes on.” [tweet this]

Kristin described ALV’s efforts to bring the hidden realities of what goes on inside slaughterhouses into the public sphere:

Kristin: “As part of the action we had a PA system out the front with recording of the sounds from inside to try to make that connection. We obviously were hoping the mainstream media would use that sound, but sadly they didn’t, which I guess isn’t surprising for mainstream primetime TV. It’s just that that’s how horrifying it is. So that was unfortunate, but we tried.

We knew it need to be as, to-get as much coverage as we wanted was the lock on in the chamber, I mean otherwise it would have just been a few people on a roof and a few people out on the street with banners which we’ve seen. It was really the gas chamber that needed to bring it all together and was obviously the most risky, how to get in there, what time to go in, when it’s a 24/7 – I mean the killing doesn’t start until early morning, but there’s people there through the night. Deciding how best to do that was really difficult. Everything ran so smoothly to plan that we were kind of all blow away ourselves, it was quite emotional. Yeah, we were all kind of shocked.”

I next asked Tim about his experience entering the gas chamber:

Tim: “Myself and three other people, Noah, Jonathan and Bonnie, we sort of locked on at the entrance to the chamber, so basically the point where the door opens, where the pigs are pushed into, and we locked on with chains and bicycle locks to some bars in the area.

Being in that space and being in that entry point, where yeah, so many have gone through, and that’s where they die, like so many, and there’s so much suffering at that point, so much terror. And also knowing that the pigs were there in the pens, just knowing that was going to happen to them as well, particularly as we walked out, seeing them all there, and seeing the workers start to operate the machinery and start them moving. It was pretty hard to see all that.

I think it was around about four, five hours maybe, in the end, and eventually the police cut the chains and they pulled us out of there. Essentially, what it’s doing is it’s asphyxiating the pigs, so they start to panic because they can’t breathe, and then the carbon dioxide gas also when it gets into their sensitive mucous membranes – the eyes, the nose, the throat, the lungs – where it sort of interacts with moisture, becomes carbonic acid, so it starts to burn.” [tweet this]

Kristin shared how some of the police who were called to the slaughterhouse were visibly affected by the pigs’ screams:

Kristin: “We couldn’t even tell all the volunteers what was going on inside to keep it super safe, so once they all arrived we let them know there’s four people locked in in a gas chamber and they were just blown away, and obviously even more determined to make it a really effective action. The police moved in a few hours later, we were surprised it took them as long as it did, and they went in and removed the gas chamber team first, that was their first focus, because obviously they were working for the slaughterhouse, sadly, to protect their business interests. So they wanted to allow the slaughterhouse to get things running as quick as possible.They set a blockade that managed to push us away from the driveway. They slowly kept moving in on us. There were 50 police officers, and there was probably on 50 activists, so it was quite intense, and they managed to slowly push us back.

And one moment that really sticks in my mind – was when the second truck that pulled in had this mural on the back that had these happy pigs and cows and chickens in a barn, you know, were in an idyllic farm situation, and that really struck us all, you know, really brought it home. Yeah, with the sun shining, and the blue sky, and we knew what they were about to go into, so it was really quite, quite awful.

The police – it’s that awful situation where part of you know they're just doing their job, and the other part of you know that their supporting the very thing we’re all trying to end. I mean everyone – everyone’s different, there’s the police that didn’t care why we were there and just wanted to get rid of us and get on with their day, and there were others that were quite emotionally impacted, and she was one of a few, she wasn’t the only one. [referring to a police officer who broke from the line, crying – see video for footage] It was pretty much as the first truck came in and the reality of what she was supporting I think must have just washed over her, and really came home to her. I have the impression that she wanted to be with us, not where she was, and she knew that we were in the right.You can also notice in the video the person next to her looks quite affected too. I’m pretty sure he looks like under his sunglasses he might even be crying as well.

There was also a moment where one of our team had the footage of what was going on inside and he was walking along the police line, showing each officer. A couple were just you know ‘move on mate’ and a couple were, you know, quite affected as well, and were trying to hide their tears at that moment as well. So it was pretty powerful.”

Not only is the so-called humane method of CO2 stunning in actuality a horrifically painful death, but the agencies meant to regulate humane animal treatment routinely endorse facilities with abusive and deplorable conditions:

Kirsten: “The slaughterhouse we shut down – DVP (Diamond Valley Pork) –  an RSPCA killing facility. A few days after the action we were watching – we kept watching their website, and on the RSPCA website it recommends gas chambers, or carbon dioxide as, you know, the best stunning method – the most humane. On the DVP slaughterhouse it actually says RSPCA approved facility. About a few days after, maybe three days after the action, that line on their website – from the slaughterhouse – was removed. It just highlight another – the fraudulence of the whole system and the animal – the so-called animal protection agencies.”

As a final thought, time shared the message ALV hopes this action has for people who are already vegan:

Tim: “Part of you know, the action that we did was to try and also motivate other people to get involved in direct action. You know, we’d love to have a hundred people locking on inside, you know, the killing factory, to really send that message home.”

Again I want to encourage you to watch the footage for yourself. You can see The Nicest Way to Die here and visit PigTruth.com for more information about ALV’s action. They continue ongoing investigations and open rescues. For help going vegan, see their sister site VeganEasy.org.

My thanks to Kristin, Tim and everyone at Animal Liberation Victoria and New South Wales for their activism and unrelenting work to speak for the animals.

I’d love to hear your thoughts on what Kristin and Tim had to share in the comments below.

Give the video a thumbs up and share this post around to expose the truth. If you’re new here, I’d love to have you as a subscriber. I put out fresh content covering all aspects of veganism every Monday, Wednesday and some Fridays.

To help support Bite Size Vegan’s educational efforts, please see the support page below or join us in the Nugget Army on Patreon.

Now go live vegan, speak up for the animals, and I’ll see you soon.

▶︎➤FEATURED VIDEOS & RESOURCES:
▻The Nicest Way To Die [See the Footage]
▻See It Through A Pig’s Eyes [Non-Graphic] ▻See It’s Happening All Over The World
▻Open Your Eyes to See
▻The Butina CO2 Chamber Customer Sheet
▻RSPCA Pig Standards