They say everything’s bigger in Texas. Well that’s certainly true when it comes to cows. With a bovine population of 11.7 million, almost two times greater than the runner-up state of Nebraska, Texas is home to almost 13% of America’s cows.[1]

In a state that prides itself on going big in everything from steaks to rodeos, it’s perhaps the most unlikely setting for this story. But that’s precisely what makes it so powerful: how very unlikely it is. Because among the almost 12 million heads of cattle across almost 250,000 farms and ranches,[2] is one single little cow who somehow managed to change Texas forever. [tweet this]

This is the story of Rowdy Girl, the cow who launched a revolution, and her home, Rowdy Girl Sanctuary. Not long ago, this land was a functioning cattle ranch owned by Tommy Sonnen and his wife Renee King-Sonnen. [be sure to watch the video to meet everyone. what follows is a close transcript with selected stills.]

Marrying into a family of multi-generational cattle ranchers, Renee had a difficult time watching the calves go off to slaughter. So Tommy made a decision, the repercussions of which he could never have imagined: for Renee to buy her own cow and become a part of ranch culture. And so it was that Rowdy Girl came into their lives.

Renee: “[Rowdy Girl] is the one that I bought for $300, six years ago. My husband wanted me to have a buy-in as a cattle rancher’s wife and so she was my first and only time I ever bought any of these animals, except for when I bought them to save their lives. And so, Rowdy Girl’s babies have never gone to slaughter. She was the gateway, and I really do believe she knows it. I think she knows it.”

Rowdy truly was the gateway. Renee’s connection to the animals on her plate and those in her backyard began to deepen. You can hear about her personal conversion in depth in this video post.

But today, Renee’s going to help tell the stories of those saved by Rowdy Girl’s influence. The most unlikely Texas residents of all. [tweet this]

There’s of course the original herd, all of whom Renee bought from her reluctant husband, and soon the sanctuary began to take on new residents, including survivors of pro-farming youth programs like the 4H Club and Future Farmers of America, organizations firmly rooted in Texas culture.

Renee: “Rowdy Girl Sanctuary has already started to get a reputation around 4H and FFA. We really don’t like the fact that they teach their kids to kill animals that they grow to love.”

Alena Hidalgo was one of those kids, and her animal, was Gizmo the pig. 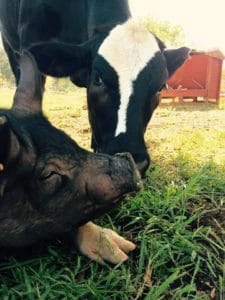 Renee: “She [Alena] is 15 years old, she comes every week with her mom, or her dad, and her sister. Takes care of Gizmo, earns while taking care of things around the sanctuary. Her and her mother, and her sister are now vegan, as a result.”

Gizmo’s roommate Roux was also an FFA surrender after not making the cut at the County Fair. The high school student who surrendered her has never come back to visit. 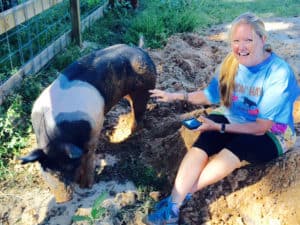 Renee and dedicated sanctuary volunteer Charles Armstrong, who was instrumental in saving fellow FFA surrender Penny Lane, shed some light on the pressures upon students in the program and why they don’t always come back to visit.

Renee: “The kiddo that brought her here – I think he had high hopes or intentions of coming back to visit, but never has. And what I heard Charles say was that they were afraid that he was going to go vegan. (laughs) So, they didn’t want to bring him here no more!”

Charles: “My boss at work, his son got Penny, and the mother and the son fell in love with her. And couldn’t see her go to slaughter. But, the dad really didn’t care one way or another. He just wanted his son to get a good grade in FFA. Because if they don’t show, they don’t get a grade and that means they have to retake another class.”

Perhaps the most visually striking resident of Rowdy Girl Sanctuary is Cinnamon: 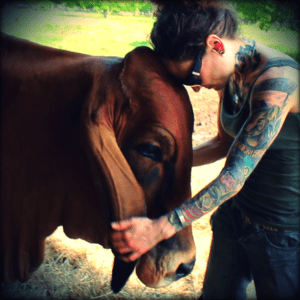 Renee: “She’s a full-blood Brahman. Cinnamon was actually scheduled to be slaughtered because she couldn’t have babies. She, too, was raised 4H and normally they don’t slaughter these animals. They just show them and breed them. And that’s what they do. But when they are not productive, like Cinnamon wasn’t – Cinnamon had some sort of issues with her ovaries. Five years, eating their food, and not productive. So, she was worthless to them.”

Every one of these animals has a story. A history. From the survivors of our food industry we’ve met, to pets who outgrew their family’s circumstances, like ducks Quackers, Remmy and Berry and potbellied pig Lilly, to these hens who were used as bait in the brutal blood sport of cockfighting. Each individual is a miracle, and a living reminder of the trillions of others who were not so fortunate.

And who would ever suspect that the place they’d ultimately find safety would be a cattle ranch in Texas? Certainly not Tommy.

Renee and Tommy have big plans for the Sanctuary and are working on a number of improvements.

Maintaining a sanctuary is no easy task. Unlike a cattle ranch, where profit is the king and animals are inventory, a farm sanctuary means putting the animals first and hoping the finances will follow.

Which is what brought me here in the first place for their 2nd Annual Vegan Awareness Festival & Fundraiser, complete with vegan cupcakes, gumbo, booths, and speakers. Renee is going to be traveling and speaking about the Rowdy Girl story, and you can find places and dates in the links at the base of this post as well as how to donate to their cause.

Farm sanctuaries are one of the most direct ways to help animals with financial donations. When animals are treated as individuals and not inventory, money is always an issue. But the rewards are unbelievable:

Tommy: “The big thing for me is, okay, I’m real big into environmental side. Real big into the health side. The ethics side is the part that I wasn’t born and bred with, but I always hated dropping my calves off at the sale barn. And I don’t have to do that anymore.” [tweet this]

So that’s the story of the cow who changed Texas forever. And I have a feeling that she’s just getting started.

To learn more about Rowdy Girl and her fellow residents, connect with the Sanctuary, keep up with Renee’s speaking events, and to help support their mission, please see the links below.

Please share this remarkable story and give the video a like if it inspired you. Be sure to subscribe to the channel for more vegan content every Monday, Wednesday and some Fridays. To support messages like this, see the support page or join us in the Nugget Army on Patreon.