The animal agriculture industry is shrouded in secrecy. We don’t see where our food comes from or what the beings who become our meals go through to get to our plates. And frankly, we don’t want to. But there’s one group that wants to open our eyes and not look away. They instead go into the belly of the beast and attempt to give some solace, even if fleeting, to animal bound for slaughter. [tweet this]

Toronto Pig Save, and really all of the pig save organizations and other activists and organizations named or anonymous worldwide do the exact opposite of the vast majority of the population. They look. They literally look into the eyes of the victims of our food production because they believe that the very least we can do for the trillions of animals we kill every year, is look them in the face and let them know that we see them, we’re sorry, and we’re trying.

I had the honor of speaking with James of Toronto Pig Save, also known as Veganoso on twitter, about the importance of bearing witness. watch the video above for his full interview and footage of Toronto Pig Save and other animal liberation and undercover actions. Here are some choice nuggets:

On his vegan journey

“I moved to Toronto 8 or 9 years ago and there’s a slaughterhouse downtown Toronto. And so, me and my wife, girlfriend at the time, we’d often see these trucks. We’d see the Toronto Pig Save vigils Lakeshore when we were out walking our dog, and it just kind of evoked us to question the choices we’re making to eat animals. We went vegetarian for a couple of years, unfortunately. But mainly because we weren’t aware of the cruelty in the dairy industry. I think a lot of people go vegetarian, they think they’re doing the right thing, not really understanding the full story. that was it, we both went vegan the same day. After 2 or 3 years of being vegan we both felt that we needed to do more to get involved in activism for the animals.”

On Toronto Pig Save

“Toronto Pig Save–it’s a grassroots organization. It was started in 2010 by our founder Anita Krajnc and she’s a vegan. She was walking along Lakeshore which is a really busy road here in Toronto, and she saw several trucks go by full of pigs on their way to the slaughterhouse. and she decided to start a vigil to bear witness to these pigs in their final moments, and that’s kind of how the organization was born.”

“We take photographs of the animals at the vigils, and we post them on our Instagram accounts or our Facebook account, and it just spreads the message. Lots of people get to see it and we have lots of conversations on the back of those photographs, and people become vegan as the result of that. And it’s also really important for the animals. They’re so scared. They’re in such pain and that they really feel a connection with us, like they know we’re there for them. They really appreciate it. I mean, you have to experience it to understand that I think.” 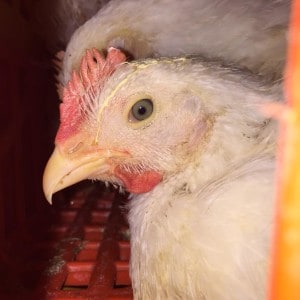 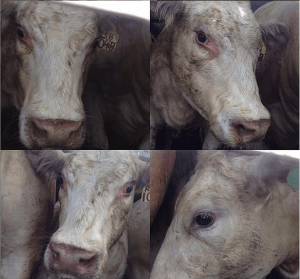 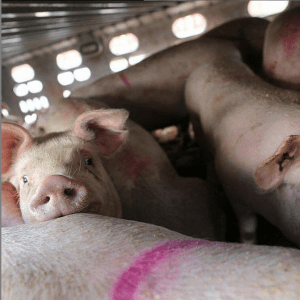 On His Vigil Experiences

“Every time you go it’s a fresh experience. Yesterday we had … an all day vigil from 7a.m. – 7p.m. and we saw maybe 30-40 trucks each carrying like 200 pigs. And I mean, this slaughterhouse can kill 10,000 pigs a day. And when they stop at the traffic lights, and you’re trying to give them water. there was this one pig and he was too scared to take water, or the watermelon that we were trying to give him, and I was just connecting with him. we’re looking into each other's eyes and it was just really really traumatic. [It's] a really difficult experience knowing that he was just going to go around the corner and get his throat slit.

“We were at a chicken vigil a couple of weeks ago and the chickens, I mean they cram like 5-10 thousand chickens into these trucks. And the chickens are so terrified when the workers just pull them out of cages, and they’re gripping onto their cages so tightly that their feet literally get ripped off. and when the empty trucks were leaving we saw 8 or 9 feet in the trucks, It’s just horrific.” 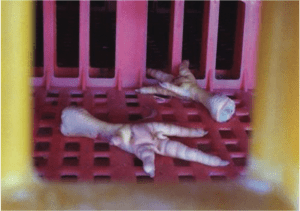 On starting a vigil organization

“Since we started in 2010, [the] Save Movement has grown, it’s an international movement now. We have locations in the U.S., in Australia, Brazil. [We] hope to open one in the U.K. soon, and anybody can get involved. … [I]t’s a grassroots movement where we're always looking for new volunteers. We’ve got details on our website: www.torontopigsave.org about how people can get involved. We can offer logistics support, any help people need.”

On interacting with the truck workers and the public

“Like the vigil 2 days ago we had lots of people shouting ‘bacon’, that kind of thing. It’s very like being in a real life vegan sidekick comic. people just shout stuff out at you out the window of cars. And the slaughterhouse workers as well, when they come out, they kind of make fun, laugh at us. …

“At the vigils we have leaflets. We hand them out to causes to get passed. You know, we’re just trying to spread the vegan message. Just trying to bring awareness because the disconnect is so strong with people. People really don’t realize what they’re doing. We’ve being brainwashed since infancy to think that it’s normal and necessary to eat these products.”

On blocking trucks from going to the slaughterhouse

“Last year we had a day of action where we deliberately blocked the trucks from going into the slaughterhouse, and I think 6 people got arrested on that day. All the charges were eventually dropped, but yeah, we have done that, and civil disobedience. Maybe that’s something we’ll consider in the future as well.”

I hope you enjoyed hearing from James on the importance of bearing witness. You can connect with him via the links to his twitter and YouTube in the video description for more information along with the Toronto Pig Save site.

Exposing the hidden world of animal agriculture and showing what really goes on behind closed doors is a powerful and vital tool to animal liberation. [tweet this] And it gives a voice to the trillions suffering and dying in the shadows of our society, completely ignored and vehemently denied by the very people who pay for it to happen.

If we can’t look at the cruelty we are paying to have inflicted, then we have no business eating its ultimate “product.” [tweet this]

I’d love to hear your thoughts on this matter. Have you even been to a vigil? If you aren’t vegan, do you think watching what your food goes through would change your behaviors? If you are vegan, was this type of action a part of your decision to change? Let me know in the comments!

Videos Mentioned:
Know What You Are Choosing
See Some Happy Rescued Animals
The Insane Animal Activism Terrorist Laws of the US