If you’re a kid and you kind of like gross stuff, then this video is totally for you!  Welcome to the third video just for kids!  Today we’re going to talk about eggs and why they’re super gross! [tweet this] and in case you missed the other two videos, (the first video was all about milk and the second was all about meat) I'll say again that I won’t be showing you anything scary, though we will talk about some gross stuff and sometimes sad stuff, that I promise to not talk down to you (cause it’s pretty annoying when adults do that, like we somehow forget that kids are smart) and I promise tell you the truth no matter what.

So you may have eggs for breakfast, and if you don’t, you certainly know of people who do. Eggs are also used for baking cakes, cookies, brownies and more.

Well, we’re going to look at why eggs are not only gross, but really, really bad for your body and why farming them is bad for the chickens they come from.

Let’s start with the grossest stuff first. You probably know that the eggs people usually eat come from chickens. Well, here’s the gross part. Chickens, unlike humans, only have one exit on their backside called a “cloaca”. And through that exit they pee, they poop, they make other fluids and they lay eggs, all from the same place.

So lots of people are having for breakfast something that came out of a chicken’s butt! Now I don’t know about you, but I definitely don’t want chicken butt food for breakfast, thank you very much. [tweet this]

Now that we’ve covered the gross place eggs come from, let’s talk about why they’re bad for your health. You may hear adults say that eggs are good for protein. Well, eggs are actually highest in something called cholesterol, which is not something you want to be eating.

Cholesterol and saturated fat, which are both in eggs, make it really hard for your heart to do its job. And stopping your heart from doing its job is not a very good idea!

Scientists even made a really long study that starting in 1976 way before you were born that found out that eating just one egg a day shortens your life the same amount as smoking 5 cigarettes a day! Now I know you know that smoking is bad for you, but most adults don’t even know that eggs are even worse! [tweet this] (so now you’re even smarter than most adults, which you probably were already anyway.)

Now there’s another big reason to avoid eggs. You may or may not have heard of the word “salmonella”. It’s a weird word and it’s spelled pretty weird too.

Well salmonella is a bacteria that chickens can be infected with and pass onto their eggs. Then, when people eat the eggs, or chicken butt food, as we’ve learned, they get very, very sick.

Now I’m sure your parents or family tell you to wash your hands because of germs. Well bacteria are a type of germ and salmonella is a type of nasty bacteria. Because so many people get sick from salmonella when eating eggs in my country, the United States, if an egg company is making a commercial using money from the government, they’re not even allowed to say that eggs are safe to eat–because they’re not! They can’t even say they’re healthy or a good source of protein or nutritious, because they’re not! It’s illegal to say eggs are healthy, nutritious, protein-rich or even safe! [tweet this] Unless they use their own money and then they can say whatever they want, even if it’s not true, which is pretty sneaky if you ask me.

Now you may wonder how chickens get so sick in the first place, and it’s not the chicken’s fault. Chickens aren’t dirty or diseased, and you can love and hug them without having to worry. The reason so many chickens get sick and then make eggs that make people sick is because of the way we raise chickens.

Now, this is pretty sad, but important. On egg farms, chickens are crammed into tiny cages and don’t have enough room to move around. The cages get really dirty and the chickens are so scared and stressed that they get really sick, just like you and I would.

You may hear that some chickens are “cage-free” or “free-range” meaning they’re not all shoved in cages, and this sounds really nice. But the truth is they’re still just as crammed together in sheds, only without the cages–it’s still dirty and there’s still way too many of them in a small space, so they still get sick. [tweet this]

Maybe you know someone who has chickens in their backyard and they eat their eggs. Well, they’re still just as unhealthy to eat and it’s still taking something that isn’t ours. And I’m sure you know all about why stealing is wrong and just because someone’s stealing from a chicken, who they may even treat really nicely, doesn’t make it right.

Now here’s the worst part about eggs. Even worse than the gross stuff about where they come from and the dangerous stuff they can do to your body. Even worse than how dirty and cramped and scared the chickens are. You see, to keep making eggs, farmers have to let some of the eggs that are called fertilized hatch into babies so that those babies can grow up to make more eggs. But the thing is, the farmers only need the girl baby chicks because the boy baby chicks can’t lay eggs. So the farmers will kill all the baby boy chicks. And they don’t do it nicely at all. It’s very scary and very painful for the baby boys.

I don’t know about you, but killing little baby chicks may be one of the saddest and meanest things I can think of. And all to make a food that’s dangerous to eat. Doesn’t make a lot of sense, does it?

well, like I said in my video on milk, sometimes adults do really crazy things for a lot of different reasons, but money is a big one.

But here’s the good news: You don’t have to eat eggs.

You can cut out the chicken butt [tweet this], avoid getting super sick from bacteria, live longer by not hurting your heart with cholesterol, and best of all, not be a part of putting chickens in horrible, scary cages and sheds and not ever, ever be a part of baby boy chicks being killed. [tweet this]

You can still make cookies, cakes, and more with egg substitutes. There are even vegan bakeries, which means they don’t use any eggs or milk, butter or anything from animals. And they taste amazing! You can even have a tofu scramble for breakfast instead of scrambled eggs and your heart, the chickens, and the baby boy chicks will thank you!

Think of the difference you can make just by changing this one part of your life. You’re pretty much a superhero of the chicken world!

I hope that this was helpful. And thank you for listening even in the hard parts. Now you know why eggs are super gross, dangerous and really mean, and my hope is you’ll choose not to eat them. Let me know what you thought of the video in the comments and if you have other things you’d like me to cover, let me know!

Here are some fun ways to substitute eggs without buying pre-made egg replacers: (click to enlarge) 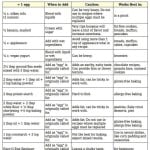 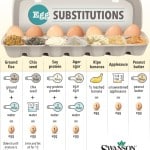 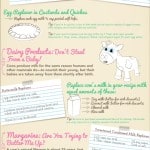 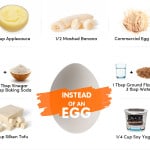 RESOURCES:
The Sciency Stuff: [from my friend Dr. Greger!]
The Long-Running 1976 Study With the Egg/Cigarette Comparison[in a video by Dr. Greger- the actual study is linked]

The Egg Industry Making False Claims [in a video by Dr. Greger- the actual study is linked]

The USDA [gov't regulatory body] Says it's Illegal to Call Eggs “Healthy” “Nutritious” or Even “Safe” [in a video by Dr. Greger- the actual study is linked]

Other Featured Videos:
Why You CAN'T Be A Non-Vegan Environmentalist
Learn About Vegan Nutrition
First Video for Kids: Say NO To Milk