It’s pretty obvious that bodybuilding and all its iterations, like bikini competing, fitness modeling, physique, figure, and the like, are all about how you look. And something that’s surprisingly rarely discussed, especially less than steroid and substance use, is the affect such competition can have on one’s body image and mental health. Today, pro bikini competitor Samantha Shorkey gives us a peak behind the curtain and shares why bodybuilding isn’t for everyone. [tweet this]

Samantha Shorkey is a true spitfire of a woman who lays all her cards on the table, something I greatly admire in a person. If you missed my first interview with Samantha, be sure to check it out to hear how she found her way to being a pro vegan bikini competitor.

She’s a two-time winning vegan bikini athlete, certified personal trainer, the first-ever vegan WNBF bikini pro and author of “Jacked on the Beanstalk: Plant-Based Fuel for Vegan Athletes,” and is also a member of the PlantBuilt vegan muscle team. And built she certainly is. 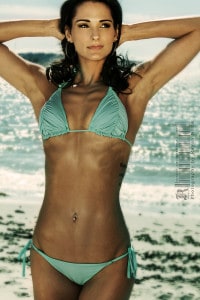 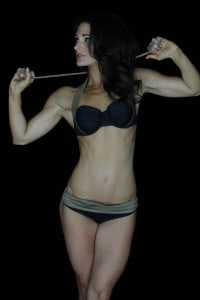 As I said, the thing I love about Samantha the most is her brutal honesty. Let’s here from her on what can be the darker side of competitive bodybuilding. [tweet this]

To hear her entire interview, be sure to check out the video above, but here are some choice nuggets:

On preparing for competitions

“What people don’t realize is that there’s a lot of smoke and mirrors going on to get to that day. You’re training for one particular day so you’re doing things like cutting water. I don’t drink water for 2 days leading up to a show. I’m taking dandelion root which is a natural diuretic to help get rid of the water retention and suck the skin to my muscles so I look really shredded. … The spray tan makes you look more and more jacked than you are and you’re oiled up. … I wish I looked like that on a daily basis but to be honest, it’s not even healthy or attainable to look like that. I always want people to know that in the off season, I’m 15-20 pounds sometimes bigger than I am when you see me on stage.” [tweet this]

On body image and competitions

“Before I ever got into competing, I used to always think I was pretty fit. I’d look in the mirror and say, ‘Yeah, I look great. I’m in shape. Genetically I think I got a pretty good little package going on here’ … I did provincial championships in Vancouver and the judges told me ‘your thighs are too thick. your legs are too big’. You kind of can’t help but let that get to you because I never in a million years thought that I had big legs … you really have to be a confident enough person in yourself to say, ‘That’s just the opinion of 4 or 5 random strangers who don’t know a thing about me and just because they think that this girl looked better than me on stage doesn’t mean that I’m not just as beautiful.’”

“I do know many women who compete and instead of something like this empowering them, it just puts their self-esteem down the toilet. … And they do awful things to their body in order to sculpt themselves into what they think these random judges want them to be … If you have body image issues going into this, you’re going to come out far worse than you came in.’”

“Once the show ends it’s very important to give yourself a few weeks or a few months to be a normal person and reconnect with the loved ones in your life, and seek support if you need to because there’s a whole world out there outside of competing.”

“You know, I can compete and if I don’t win I can be a normal person again after that. And I like myself whether I’m thick, thin, jacked, scrawny, it doesn’t matter. I’m a pretty confident person and I think it’s so important if you do do this for the long term, to have that confidence.”

On bodily functions and keeping a sense of humor

“I always joke about the vegan farts and I wrote a whole blog post about when you’re a vegan bodybuilder, you’re eating a high protein, high fiber diet, and I talked about farting nonstop. And peeing into a pee cup so I don’t get pee splashes on my spray tan. … I definitely heard a lot of people say, ‘eww, you’re gross, and guys must think you’re hideous!’ well you know what, I’m real and I would hope to be relatable in that girls would appreciate that more than me pretending ‘oh, I don’t fart.’” [tweet this]

On why she does it

“I guess I’m a bit of an exhibitionist. And I always say I’m an egomaniac, and for me I just love being up on stage practically naked, strutting my stuff. And I swear part of the reason I always do so well is because I portray that confidence.”

I hope you enjoyed hearing from Samantha on this issue. To get connected with Samantha and hear all the nitty-gritty details of her training, eating, and other activities, check our her blog jackedonthebeanstalk.com where you can grab her ebook, follow her on social media, those links are also below, and inquire about doing online coaching with her whether for competitions or just getting into shape.

And as Samantha said, if you’re wanting to get into competing, it’s important to go in with your eyes totally open to what it requires. I’d love to hear your thoughts on this. What do you think of the body image and self-esteem challenges inherent in appearance-based competitions? It is something you think you’d be up for? Let me know your thoughts in the comments!  And check out my original commentary video on vegan body image.