Want to learn how to make a video about interesting vegan facts that subversively gives the vegan movement a kick in its collective gonads?! [tweet this] Great! Let’s get started! We're going to study a video called “Top 5 Vegan Facts” recently released by WatchMojo, the 7th largest YouTube channel with over 10 million subscribers.[tweet this]  So, how did they successfully make a deliciously subversive anti-vegan video out of an innocuous-sounding 5 fun facts premise? Let’s take a look!

Be sure to check out the video for the full effect of super-snarky delivery and sample clips from the “Vegan Facts” video! (clips are denoted below in “quotes”) Here is a summary of the my tutorial for making a successful and super-fun anti-vegan video!

First, call your video content as “the most interesting and original facts about veganism that you might not have heard before.”

Even though you’re not actually using any factual basis for your claims and parroting many overly tired anti-vegan arguments in the guise of “original fascinating facts!” [tweet this]

Second, use lots of clips from popular culture with the majority doing the vegan mocking for you. [see video for examples]

Now let’s dig into the facts. Show you really mean business by leading with a fact that’s not even about veganism and is a borderline non-sequitor. Like, “at least two independent studies looking at fossil evidence suggest that eating cooked foods, including meat, helped our ancestors brains grow over millions of years into the brains humans have today.”

Now just hope that people didn’t listen to your own words that it was the process of cooking, not the meat consumption, that most aided in brain development, a view also supported by Harvard anthropologist Richard Wrangham. [1][2]

Also don’t mention the fact that the human brain runs primarily on glucose, [27] not proteins and fats, meaning higher starch consumption primarily fueled our brain growth. [3][28][29] Ignore any articles, studies or scientists who point to our ancestors largely vegetarian diets.[4][5][6][7][8]

To really bring your point home, show a clip from Gladiator, but for the love of all that is holy, do not to mention any studies showing that the gladiators were primarily vegan, [6][7][8] like this quote from a lecture by Dr. John McDougall:

And most of all, be sure not to actually cite any studies supporting your claims outside of a screenshot of an article.

And don’t worry about the fact that what our ancestors did or did not do has no bearing on the choices we make today.

No one cares about logic.

For your next fact, offer up a statistic. People @#$! love statistics and it makes you sound smart. Say something like, “up to 6% of the United States is vegan and a large majority of non-meat eaters are women.”

Now throw in a comment that reminds people just how@#$! awful being vegan is, like, “it’s no surprise that vegans are in the minority when it comes to their diet.”

And in case any men are considering veganism, be sure to emasculate them with stats like, “up to 74% of those who don’t eat meat, whether they be vegetarians or vegans are female.”

And definitely don’t show them pictures of these vegans: 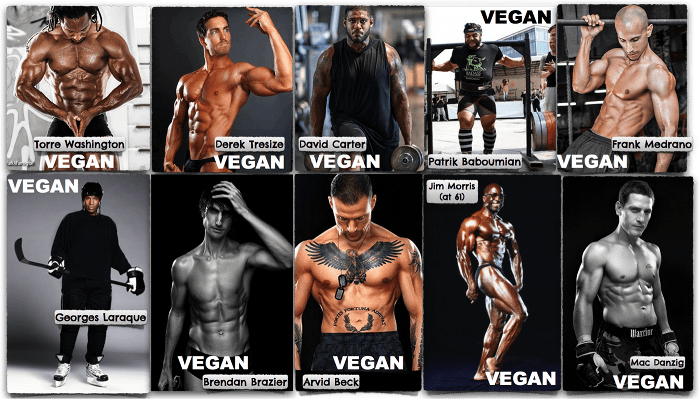 Then to seal the deal, show a clip of such a female vegan saying something outrageous, like Freelee the Banana girl uttering, “you should absolutely be forced to be vegan.”

For your next fact, back off a bit in case people are catching on to your real aim and mention something nice about veganism, like “a vegan diet sees better results in weight loss attempts.”

Now that you have them lulled into a sense of security, it’s time for the big guns:

“A vegan diet may lead to an increased risk of heart disease.”

Oh yes, my friend. You are going there. Before people freak out, be sure to toss them something marginally scientific-sounding. It’s safest to stick with a widely held misconception about veganism so they don’t have to do much work to believe you:

Nailed it. Bring it home with some elaboration and, if you can, a 3D rendering of some medical stuff:

“…such as omega 3 fatty acids and vitamin b12, which leads to an increased risk of developing blood clots or hardened arteries.”

Definitely don’t link to a playlist like this with a medical doctor whose specialty is clinical nutrition responding to every major nutrient of concern when going vegan.

But be sure to give them a little credit in a backhanded statement that actually lends more credence to your cause, like, “a low carb vegan diet can decrease the risk of heart disease by as much as much as 10% over 10 years.”

Completely ignore the fact that a plant-based diet is the only way of eating that not only prevents but actually reverses heart disease. Or that eating animal products raises your cholesterol, the one true risk factor for heart disease. [10][16][17][18][19][22]

It’s either plants or Lipitor, people.

Then close it out this section with some vague comment that allows the viewers to continue eating exactly the way they are, like, “maybe the takeaway is that when it comes to nutrition, science will contradict itself eventually and what was going to make you live forever is now going to kill you and visa versa” totally sidestepping, of course, that your video is a shining example of the source of such confusion.

Then, throw down the ultimate vegan trump card: “and I give up, give me a bacon milkshake.”

Because this is an original video, remember and no vegan has ever heard the bacon argument. Genius.

Now in case anyone is still considering going vegan, crown this masterpiece with a fact that will shut them down before they start with: “the majority of people who attempt a vegan diet abandon it.”

Make sure you make it sound like it’s really hard not to torture and kill animals for food.

Make sure not to say how the majority of people who start an exercise program also quit, because people may realize it’s not the exercise or veganism’s fault – it’s the people.

Just say, “the most common reasons for getting back on the meat train are boredom with veggie food options and finding it difficult to sustain a meat-free diet.”

And do not include this statement from this video: “Because once you rule out the flesh of animals’ bodies the secretions and objects that come out of their orifices, there’s just really nothing left to eat!”

Now wrap up this whole shebang with the most shocking statement you can find from a vegan, take it out of any context of course, and show how insane they are. Try Freelee's one video again with: “you just gotta step the @#&! up or you really don’t deserve to live on this planet.”

Really focus on this one shocking thing this one vegan said, and totally ignore the countless shocking things that every non-vegan pays for and supports with every bite they take.

And if someone has the nerve to respond to your claims with facts, make sure to hang on to your ambiguous wording with a death grip.

And whatever you do, don’t tell the truth.

Now I don’t know what your motivation is for this video. We already know that the American Egg Board with the USDA’s approval paid $33,000 to pay popular food bloggers for positive pieces on the wonders of eggs. So maybe you got a little financial boost.

If you want to support future videos, see the support page or join us in the Nugget Army on Patreon.

Give the video a thumbs up and spread it around to debunk this propaganda. If you want some actual information on veganism, check out some of my videos linked below. Subscribe for more vegan content every Monday, Wednesday, and some Fridays.

HEALTH:
What’s REALLY Killing You
How NOT To Die
The Vegan Nutrition Concerns Playlist

ENVIRONMENT:
Everything Wrong With Environmentalism in 11 Minutes Or Less

CORRUPTION & LIES:
The Great Egg Conspiracy
Why Your Doctor Is Lying To You

2] Live Chat: Did Cooking Lead to Bigger Brains? [scroll down for transcript] by Ann Gibbons, American Associate for the Advancement of Science

4] Human Ancestors Were Nearly All Vegetarians by Rob Dunn

5] Gut Check: Should You Embrace Our (Mostly) Vegetarian Past? by NPR

13] Serum-cholesterol, diet, and coronary heart-disease in Africans and Asians in Uganda: 1959. by Shaper AG1, Jones KW., International Journal of Epidemiology

15] Studies of cardiovascular disease and cause-specific mortality trends in Japanese-American men living in Hawaii and risk factor comparisons with other Japanese populations in the Pacific region: a review. by Benfante R, Human Biology

19] The Cause of Atherosclerosis by William C Roberts, MD

20] The Garden of Eden–plant based diets, the genetic drive to conserve cholesterol and its implications for heartdisease in the 21st century. by Jenkins DJ, Kendall CW, Marchie A, Jenkins AL, Connelly PW, Jones PJ, Vuksan V.

21] Is the Present Therapy for Coronary Artery Disease the Radical Mastectomy of the Twenty-First Century? Caldwell B. Esselstyn, Jr., MD

26] Helpful Videos On Heart Disease by Dr. Greger of Nutritionfacts.org

29] (In Laymen's Terms): Why do we have big, intelligent brains? Carbohydrates, research suggests by Harry Readhead for Metro.co.uk

← The Worst Telethon Ever + Come Meet Me Places!Why Vegans FLIP OUT! →