When you think of someone who is likely to go vegan and start a farm sanctuary, I’m pretty sure the first person to pop into your head is not a multi-generational cattle rancher whose entire livelihood is dependent upon the slaughter of cows. Such a conversion would be nothing short of miraculous, right? Well, my guest today is here to share with you a miracle. [tweet this]

There is seldom anything quite as powerful of a vessel for veganism reaching unlikely populations than the conversion of the most unlikely of the unlikely. I say this all the time to people who email me and are upset they didn’t go vegan until their 50s or 60s, but they will now have the ability to reach other people in that stage of life who may not want to listen to a ridiculously tattooed girl on YouTube. *cough*

In the same vein, my guest Renee King-Sonnen, who married a multi-generational cattle farmer in Texas, has the unique ability to reach other people who work in the heart of animal agriculture and show them there is another way, that they don’t have to make their income from the suffering and death of other beings. One of the objections to a vegan world is that farmers will be out of work. Well, Renee is blazing the path to an alternative. I’m so excited for you to meet this one-woman revolution. 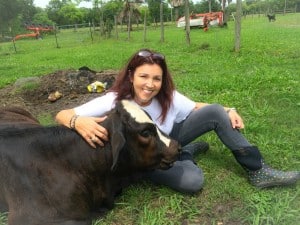 On her life as a cattle rancher

“I became a cattle rancher by default. I assure you it wasn’t in my plans to have anything remotely to do with even living in the country. My husband Tommy, he’s…he’s been [a rancher] and his whole family generationally has been in cattle ranching and so when I moved here, the cows were here, the chickens, the horses. Well, not the horses. He got the horses some time later for me. But that’s how I became a rancher was by being a city girl that moved to the country, and married a man that I really love.”

On being an animal-lover in a ranch

“I moved out here and I always fancied myself an animal-lover. I always loved my dogs and my cats. I had a ferret. My grandma had birds. She used to take us to the zoo and I loved all the animals, and the rodeo, and being from Texas, that was just a big deal out here. Never once did I ever have a connection that there was anything remotely ill-conceived or wrong. …

“And so living here, because I love animals, I gravitated to animals that I also ate. And I also wore on my skin or my feet, or gravitated to animals that I used to watch in rodeos. … [S]o I started getting this connection because I did have an innate love for animals but it was enforced and indoctrinated upon me as a young child to love the ones at home, and eat the ones out there.”

On the cruelties of cattle ranching

“I remember the red trailer being out in the field. And just was like, so stark against the green grass, and the cows, and the babies, it was there. It was there for several days because you had to bait the babies to go in. They didn’t want to go in except that they were baited, and there was a chain on it so that the babies could get through, but the big ones couldn’t.

“And so, I watched that for a few days and my connection began to get disrupted as my disconnect. I started going ‘What the hell! What is going on, ya know?’. And I just…then I snapped back to the good rancher’s wife, you know,I gotta be tough. And the first time they had like, I don’t know, six to eight of the baby calves trapped in there that I had rumbled up the first seven or eight months I’ve been here. And then when the trailer pulled out, and the mother cows literally chased the trailer, crying, literally chasing it trying to catch it. The little babies in the trailer, bugged eyed, trying to get out [of] the little bars, their prison, and I just stood there in disbelief. I think I went into a literal shock. …

“I have been so tough until that point. And when I saw the trailer go out of the gate, and down the highway, and the mother cow still chased them along the fence side, and something broke in me. [tweet this] Just broke and I told my husband after it all happened, you know, ‘How do you do this?…how do you do this?’…

“The mamas [cows] would cry every single night when the babies left. I mean for days and days. They never stopped. They did not stop until they lost their voice. [tweet this] There was no break, and my husband would just about his business watching the news, eating, doing whatever. And I’m over here about to go out of my mind, go outside with them, screaming, hollering, crying, begging forgiveness. And of course, all the while I was eating hamburgers, and chicken sandwiches.”

On her turning point

“The turning point for me was the first time the red trailer took the baby calves that I had grown so used to and loved to the sale barn which eventually meant to be lot and slaughtered. As soon as they would leave here ,Emily, this is what would happen, and I threatened to my husband that I go to the sale barn. …

“And what they do there is once they leave here, their life changes forever. They become just slaves! They go into these horrible metal chutes! They’re just whipped into line! They’re tagged! They’re branded! They’re sold! They’re traded! They either go straight to feedlots or they just step in their own feces. Their own urine! They’re just clustered all together in these horrible environments! … You know, all it is…we are part…we were part of Big Agriculture. We were part of the system that is destroying the fiber of everything we stand for as humans.” [tweet this]

Rene says that she prevented her husband from selling calves for 10 months when they should have been sent to slaughter at 6 months. She continues:

“[H]e [her husband] was…we were like at a breaking point. Almost ready to divorce. … [On] October 31st of last year, Halloween, I started watching just videos. I started like peeking at stuff that I didn’t really want to watch, and I would bring chicken sandwiches home. I’d be eating them and the chickens would be at my feet, and I would start getting this breakdown in my awareness that I was eating their cousin or their mother, or…you know. I’d be eating, I’d be bringing home hamburger meat or steaks from Kroger and I would be pulling into my driveway, and not wanting to look at the cows. I find myself literally not wanting to look, like I didn’t even want to know that they were there. …

“And from that day forward I’ve done everything I can to no matter what it is, even from honey to…I used to eat my own eggs here at the ranch. I don’t do that anymore. You know, we just don’t do that. …

“And Houdini [one of the calves] had been getting out every single day, if you heard anything about this story, you know that Houdini was getting out along the highway, and so my husband was adamant about Houdini was going to have to get out of here. She was a liability and there was no way [I was going to sell her] because that was Rowdy Girl’s baby. And so I looked all over Texas for a home [for her]. … [B]ut there was no one that would take these cows…no one.

“[O]ne day I told my husband ‘Look, you know, I can’t find [her] a home. Why don’t we just figure out how to have a sanctuary right here in Texas?’ He thought I lost my mind, ya know. He said ‘You’ve lost your mind literally. This is not L.A.. This is not New York’. He said ‘Would that even work? We can’t do that here Renee, no way. … What would everybody think? And there’s no way that can happen here in the middle of all these sale barns all around us.’ And I said ‘Well what if I just buy your cows?’ And that’s when he just about lost it. You know, I was screaming ‘No, let me buy…let me try to buy these cows. Let me figure out how to have a sanctuary’. And I said, ‘Maybe you don’t know how to do it. Maybe I don’t know how to do it but I’m sure somebody does’. And so, that’s what happened, and I didn’t know. But my…think my heart space and my soul lined up with the…a real big vacuum and a need for our planet. … He’s okay with it. I mean, he went vegan too, ya know.”

On her husband's vegan journey

Renee says that her husband took longer to become vegan. His family has long been hunters and cattle ranchers and he found it difficult to part with the deer antlers that have been in his family for generations. She continues:

“I mean, I was feeling the heaviness of them all [the deer antlers] over me and my husband was going plant-based at the time, but his heritage was as a hunter. His Dad, his Grand-Dad, his great-Grandfather had a slaughterhouse for god’s sakes, in Houston, one of the biggest ones. They used to drive cows from San Antonio like cowboy days …

“Because his heritage was so deep it was really hard for him to make the connection, especially about the deer heads being on the wall because they were just mementos. He would use this terminology with me and I showed him your hunter one.

“He finally, just one day decided he didn’t want them on the wall anymore and now I hear my husband talking all the time about how good it is for your health. … He’s making the connection. He’s gone from plant-based to now, I would say that in his ethics, in his mind, he’s probably 75 percent vegan in his mind. He’s definitely totally plant-based but he’s getting there ethically too.”

I hope you enjoyed hearing Renee’s incredible story of conversion. I think her husband may win the most unlikely vegan of all time award. There’s so much more that I didn’t have time to include in this video, like the fact that they are starting a veganic farm on their property, meaning growing their own food and food for their community without using any animal manure, bone meal, or anything from animals.

As I said in the beginning, Renee is creating a model for other farmers to follow–the end of animal agriculture is the beginning of sustainable veganic agriculture and there is still plenty of work for farmers.

Renee has the support of such heavy-hitters as Kip Anderson, the creator of Cowspiracy, and Howard Lyman, a former cattle rancher himself turned vegan animal advocate, and her mission is growing by the day. You can check out all her links below to get in touch.

Now I’d love to hear your thoughts on this incredible story. Does this make you rethink the possibility of who can be vegan? Are you an unlikely vegan or vegan-to-be? Let me know in the comments.

Resources & Featured Videos:
The Importance of Farm Sanctuaries
Is Hunting More Ethical than Factory Farming?
Deer Overpopulation: Solution or cause?
What Our Choices Really Mean
Loving One Animal While Eating Another: Speciesism
Everything Wrong With Environmentalism
The "Humane" Myth
Why Eggs Are GROSS

← From Cancer Scare to Vegan Fitness Model At 40+!America’s Got Talent Star Myq Kaplan Finds Humor In the Darkness →